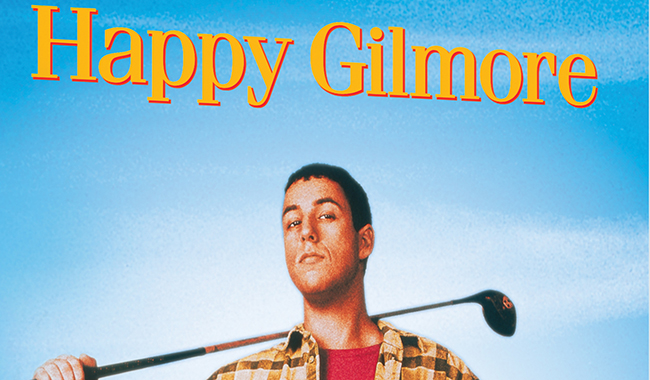 Adam Sandler never quite hit the same heights as he did in the early to late 90’s period – and on the top end of that scale is this Golfing –Comedy Happy Gilmore.  Sandler plays the titular character – a Hockey wannabe who’s been trying out for years, but never gets on a team (because he’s shit). The one attribute he has that stands out is being able to hit the puck hard and a long distance.
By chance then he ends up trying his luck (and hopefully to make a few bucks) down at the golfing range. Here he’s spotted by Chubbs Peterson (an unbelievably game and magnetic Carl Weathers) who manages to convince Happy to try the sport out for real.

The comedy and action picks up into high gear as we go from one contest to the next to see Happy not only perfect his game, but pick up the attention of a girl, and the ire of the man who stands for everything happy is against (an also magnetic Christopher MacDonald). It’s great stuff with plenty of action, witty dialogue, funny characters and well thought out one liners as well as set pieces for Sandler to navigate himself through -0 not least of all the teaming of Gilmore with real life game show host Bob Barker which has hilarious consequences).

Sadly this DVD release comes with some vanilla items like production notes.  Sandler hasn’t been a big extras man for some time, and shows no signs of coming back to revisit what is clearly some past glories – Happy Gilmore being at the top of that tree.

So, on the off chance that you don’t own this already, and don’t care for a Blu-ray version (Which might have scored a few more sales than this release) – Happy Gilmore is most definitely not just a worthwhile Sandler movie, but a really worthwhile comedy.