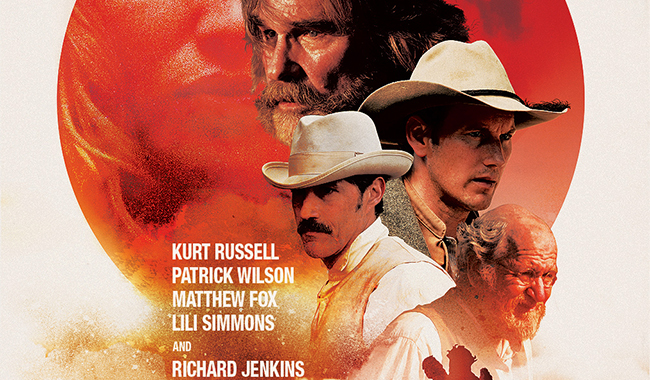 Kurt Russell is back in western territories for this pulp western story about saving friends from the “savages”. Part road story, part violent exploitation with hints of horror thrown in for good measure.

Russell is the small town sheriff who wounds and then locks up a drifter (David Arquette). But it seems the drifter has a certain group of mountain dwelling savages who kidnap him, one of the deputies and the local doctor’s wife who was tending to the injured mans wounds.

The following day the Sheriff, his elderly deputy (Richard Jenkins), the Doctor (Patrick Wilson) (who himself is recovering from a broken leg) and another local armed gentleman (Matthew Fox) head on out for what is to be a several day journey to rescue those that were taken.

The audience then have to settle in for the road trip as there is little action along the way, but plenty of banter between the four men. Each of them very different who walk a very different path in life – and often they do brush up against each others ideals.

Viewers also need to get used to Wilson sweating, limping and forever falling and injuring himself further as the man determined to get his wife back, but more often than not letting stubbornness get in the way of sense. A large amount of screen time could have been saved if they had cut half of the shots of him desperately hauling himself across the gravel and rocks.

But the banter between the men is golden, often played for comedy. You’ll get more than your money’s worth of laughs from the often dim-witted deputy played by Jenkins: Loveable and hilarious all wrapped up in one well intentioned man. Fox gets the smallest of the four roles, but when he is called upon to speak it is abrupt, rude, to the point and also sometimes hysterical. If Fox was looking for a departure of any of the good guy roles he has played on TV over the years then this is a perfect venture for him to display such talents and to add a memorable role to his resume.

Which leaves us with Kurt Russell as the man leading the party. Often listening, parlaying and generally leading the men forward. Russell is known for roles that often have a sense of grit and grime to them, but this doesn’t really shine through until the last stretch of the film. But once you are there, you get some truly effecting; bizarre (and again hilarious) Kurt Russell action proving that he is still one of the most understated actors of his generation.

Bone Tomahawk has a lively supporting cast taking part early on, it has an engaging look, hard hitting violence later on in the film, and a band of men worth spending a couple of hours with. True this could lose some of that time for pace, but all in all this is a journey worth taking.