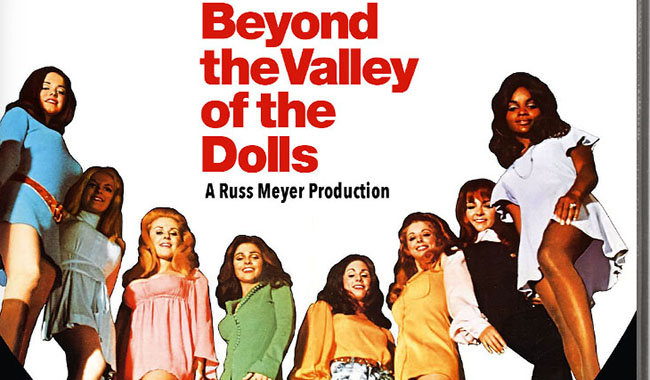 Beyond The Valley Of The Dolls Blu-ray Review

A 60’s girl band tour America seeking fortune, fame and love – and find sex, drugs, rock n’ roll and pressures from all around getting the better of them.

Roger Ebert and Russ Meyer’s screenplay is all shades of decadent, psychedelic, inventive and bonkers all at the same time – But the commentary they make (despite how made up from their own imaginations they claim it to be) is never truly too far from what we have learnt about celebrity lifestyle’s in the realms of the real world anyway.

Arrow have as per usual put together an impressive package.  Roger Ebert is always good value when it comes to commentaries on film as he knows how to dismantle scenes as they unfold in front of his eyes. It’s interesting here to hear him do it with work that is essentially his own.

The cast get to bring in their views on the second commentary track.

There are also plenty modern interviews and retrospectives on the film as well. A half hour “making of” and then various featurettes on aspects of the film including the music, the era and provocative scenes in the film.

The only really odd inclusion is a previously used DVD introduction by actor John Lazar which plays just plain weird. But then he did get the most flamboyant role in the film, so this was clearly someone’s idea to let him off the leash for an in camera introduction.

Despite Meyer’s reputation for big knockers in his films (and there is no shortage of them here) – Beyond is a much more restrained on the sex compared to his other films. There is a focus on the feel of the era and the vibe that follows the characters around – which means just as much focus on the drugs and the rock n’ roll. It is an interesting reflection on the times it was made in. It doesn’t always makes sense, but then Meyer’s style wasn’t meant to always make sense, but an impression for sure. This is perhaps his most accomplished work in the mature sense, funny and in the weirdest sense of the word: reflective. It truly does go beyond.