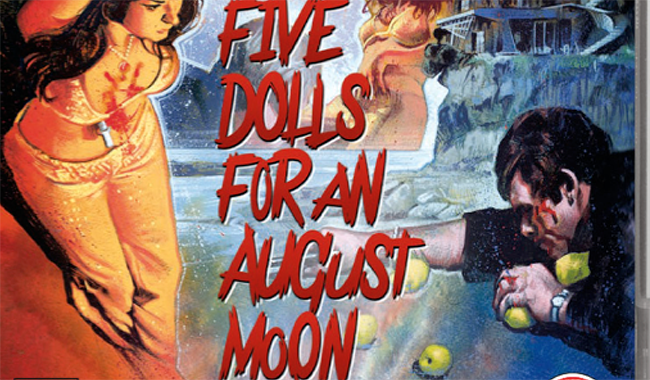 Arrow continue to put out titles from one of Italy’s best – and here now comes Five Dolls For An August Moon. Perhaps one of Mario Bava’s more “Agatha Christie” type of movies.

A group of people are stuck on an island together – arguments and business ensue and before you know it bodies start to slowly pile up. Who is doing it? Well if you’ve seen enough of these types of films you’ll get the gist.

Bava works hard on camera angles, shots as well as movement of the camera in his scenes. Right off the go there is a strong sexual and psychedelic feel to the film as we are introduced to a large portion of the cast in the opening scene. But it never manages to retain this strange feeling – instead opting for a rather age old tacky script. In fact the whole murder aspect of the film is so off camera that you wonder why they bothered at all. The whodunit simply becomes a waiting game with little to no tension built around the characters that remain, instead giving way to voyeurism.

It looks good enough for sure. The sound can sometimes be an issue – but this will also depend whether you are listening to it in Italian or English.

The extras are plentiful enough. Bava biographer Tim Lucas provides a commentary. There is an hour long look at the directors work (featuring various well extablished directors like Tim Burton and Joe Dante giving their two cents and it is hosted by British critic Mark Kermode who as always makes keen and well thought out observations even if his delivery is rather stale). Arrow are making good on their continued focus on Bava, and there is plenty more to go.