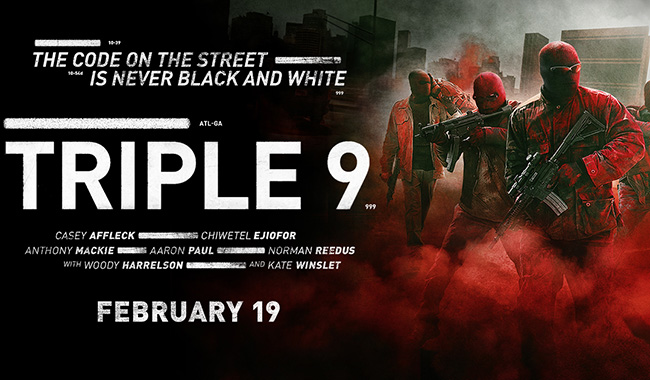 Trust no one. That’s the lesson which rookie cop Chris Allen must learn as he sets out on his new venture in gangland Atlanta. There he tries to adjust to his now life out of the military, his wife comes to grips with their new home, all under the watchful eye of his Sergeant Detective uncle, Jeffrey (Woody Harrelson).

Little does Chris know, there is corruption throughout the force, the Russian mob are hiding in the gangland underbelly, and some criminals are about to pull off a heist. And for this heist to work, they need a triple 9 to be called in – the code for officer down.

What follows is a film of bank heists, shady dealings, violence, theft and some mild police brutality in the form of throwing snitches down flights of stairs. But these snitches are not as they seem, nor are the cops, and even the bad guys fancy a double cross from time to time, which is why we must learn to trust no one.

Casey Affleck plays the lead in this gritty tale by director John Hillcoat, of The Road and Lawless fame. With these previous works, you can tell you’re in for a thrilling ride. And none more so comes to mind than the astounding movement of this police force infiltrating a council block following a drug lord.

Such is the intensity and credibility of the sequence, you are brought right in as Allen and his partner Marcus Atwood (Anthony Mackie) tour the estate with their team, moving with fluidity and precision behind a single riot shield.

On the other side of the narrative are the criminal masterminds behind the heist, who are collaborating with the Russian mob, though not for their want. Here we have Atwood playing the corrupt cop, along with his mastermind Michael Belmont (Chiwetel Ejiofar), brothers Russel and Gabe Welch (Norman Reedus and Aaron Paul) and one final crooked cop, Jorge Rodriguez (Clifton Collins Jr.).

We also have Gal Gadot and Kate Winslet as the Russians orchestrating everything, and this rounds out our cast. As it’s plain to see, this story is full of characters, main and supporting. There’s enough material here to fill a much longer film. That being said, Hillcoat’s greatest achievement may be telling a story where no one feels hard done by, and everyone gets their share of the action.

A neatly balanced tale, the story is grounded and tough. The action sequences are superbly choreographed, the gangland players are real people from the streets of Atlanta, and at no point do you think anyone in this story is safe enough to make it to the end.

The mob send messages, the cops take people out, some of the gangland get in on the act, and the heist machine have their own part to play as the film makes it’s way down the tunnel of death and destruction, but it never feels clichéd or needless. Every scene pulls a string in the yarn that is Triple 9, each play a movement in the overall arc.

Enough twists and turns to leave you second guessing right until the end of the film, but it never feels forced. Affleck is subtle in his performance as the tough cop looking to make his mark in his new city, while Ejiofar and Mackie are entirely menacing in their roles as the villains of the piece.

Winslet and Harrelson, as expected, steal the scenes they appear in, but the film belongs to Hillcoat for making the whole thing come together in under 2 hours, without dragging nor feeling stuffed with nonsense. Triple 9 is to the point, and that is to point the finger at everyone, trust no one, and that the world is a dirty and gritty as you can expect.