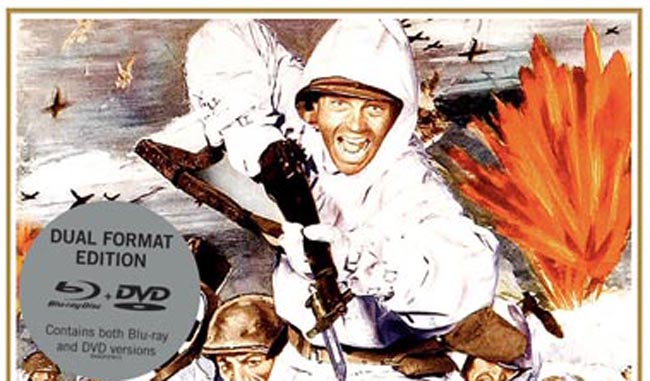 Sam Fuller is among the foremost directors of war films. As a personality he was a dynamic director, one of the original macho directors falling in between such great Hollywood action filmmakers as Raoul Walsh and Sam Peckinpah. He worked on a low budget and with limited means with his early war films including The Steel Helmet (1951), China Gate (1957) and the new film released on the Eureka! Masters of Cinema label, Fixed Bayonets! (also made in 1951). What all these films have in common is that the subject is recent post World War II conflicts that deal with American soldiers fighting faceless communist hordes in Asia. While China Gate deals with the war in French Indonesia, both The Steel Helmet and Fixed Bayonets! tackle the Korean War, still going on when both films were made which would have either resonated or proved hard with American audiences on its release. The Steel Helmet was only Fuller’s third film, following a couple of low budget westerns he had previous to this film. Fixed Bayonets! was made directly after and, like the first film dealt with soldiers caught behind enemy lines in the Korean War. In The Steel Helmet American troops hold out against overwhelming Korean communist forces in a Buddhist temple while in Fixed Bayonets! American soldiers are caught again behind enemy lines in the winter against an advancing Chinese-Korean communist army.

The film opens with an American division of some 15,000 men caught in snow drift mountains and are retreating back via a pinch point that is a bridge they  need to cross before being cut off by the advancing communist army and before they are able to blow the bridge up, the American forces only way out. As a result a 48 man platoon stays behind to fend off the advancing forces. They of course face (like in The Steel Helmet) overwhelming forces but also the hardships of winter. The rest of the film focuses on the psychology of individual’s exposed to such conditions and the problems facing the NCOs leading them; the most charismatic of these is the gruff bearded Sergeant Rock played by Gene Evans (who had also been a central figure in The Steel Helmet). The other man struggling to keep his men together is Corporal Denno (Richard Basehart). One of the other actors involved is in a very small minor role and that is James Dean in the early days of his very short career.

The production values and sets on this film are not the best and in fact look very fate, but like a good theatre production, the director is able to infuse the film with such strongly outlined characters that this is almost forgivable. One of the problem with the characters that, other than the bearded Evans, many of them are fairly generic types and the viewer is not able to get a good delineation of who is who. The picture quality too is okay and the film is a good fairly intelligent time killer. A classic, albeit minor. As is usual with Eureka! it is a well packaged film with other than the production stills extra and a comprehensive booklet, but there is little else in the way of packaging.