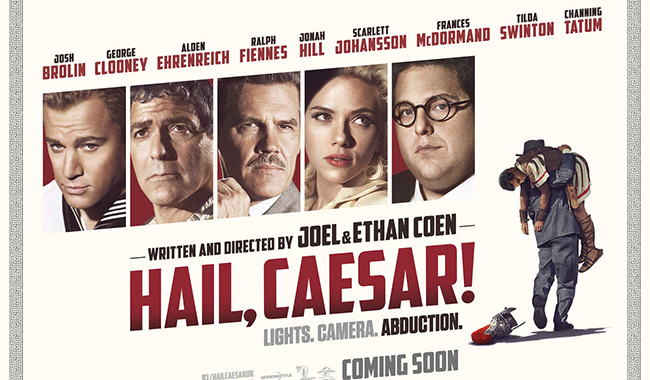 1951, Hollywood: Movie studio produced Eddie Mannix (Josh Brolin) has a heck of a day ahead of him. He has to move a star from one type of period picture to something completely out of their range; and then after an actress (Scarlet Johansson) gets pregnant he has to arrange for this to be kept secret and then for the actress in question to adopt her own child; and he also has to deal with the abduction of one of his lead actors (George Clooney) from a currently shooting historical epic about Jesus.

Brolin is excellent as ever, but whilst he is out main guy, we often divert to other places to see what other characters are up to – Clooney as the abducted actor gets to cosy in by the beach and chat with a group of communist writers (who have technically kidnapped him), rising young star Hobie Doyle (Alden Ehrenreich) moves from set to set and studio social job to social job as he charts his rise in the industry. And there are a flurry of cameos in strange places (Jonah Hill wasted in a role that lasts maybe 2 minutes), Channing Tatum used for his singing and dancing skills, and Christopher Lambert and even Ralph Fiennes as lot directors.

This is undoubtedly a Coen Brothers movie. Returning actors are present. Carter Burwell’s music is present. The 1.85 shooting frame is present. Absurdist humour is very much present. There is a clever overlapping of characters coming into the centre of the piece.

And yet there is a. Dry hollow feel to the piece. It’s almost as if the centre itself is missing. If this were an stone archway it would be missing the headstone. Sometimes the film feels so episodic you might wonder if it would have been better fit on TV.

There are some genuinely funny moments, some truly very cinematic moments, but there are also a lot of moments in between these moment of greatness that don’t honestly know what thy are doing, or how to proceed.

The film is akin to the Coen’s own Barton Fink – full of fury and no answers. Thankfully this film is all the lighter and therefore more diverting. But in the end you are essentially diverted nowhere. Thy just hope you like what you see out the window on the way there.