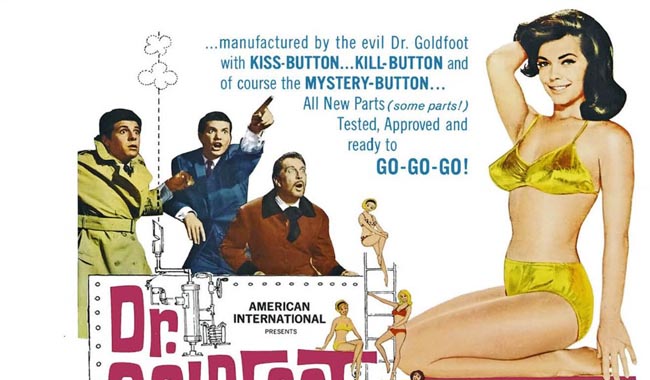 After James Bond became one of the cinematic phenomenons of the 1960s it was inevitable that there would be copycat films and those that at least contained references to Bond or was anti-Bond or even a parody of the spy, such as Michael Caine’s three Harry Palmer films he made in the 1960s, James Coburn’s two Flint films, The Man From UNCLE films or the more serious and realistic John Le Carre spy stories and film adaptations such as The Spy Who Came in From the Cold (1965). On the other end of the spectrum there were more comical variations as with a number of dreadful copycat films that came out of Europe or Dean Martin’s outings as Matt Helm. There was also the two Dr. Goldfoot films. These were among the worst of them all and bringing with it was a baggage of downright offensive sexism and a villain in Vincent Price slumming it as Dr. Goldfoot but the first film at least had a rocking Go-Go theme.

The first film was called Dr. Goldfoot and the Bikini Machine which of course starred Price as the title character. Made in 1965 the film is set in San Francisco and one of its plus points is its good use of locations with the Coit Tower, Golden Gate Bridge, the Ferry Building and Nob Hill prominent throughout. Dr. Goldfoot is a super villain of the Lex Luther variety who will be hell bent on world domination by the second film. Here he is dispatching his girl robots, the best programmed of which is Diane, robot #7 who moves through the streets of San Fran with purpose, stopping traffic and eventually running into her target, the wealthy and lusty young Craig Gamble (played by singer Frankie Avalon). Her brief is to seduce him to sign over his wealth to her and ultimately Goldfoot once they marry. A secret SIC agent (and yes the script does milk this) (Dwayne Hickman) tries to uncover Goldfoot. Together the dumb pair of Avalon and Hickman try to stop Goldfoot and his army of bikini clad robots. The film ends with a spectacular chase sequence through the streets of San Francisco. Both these actors are reprising their roles from the camp teen musical Ski Party made earlier in 1965.

In 1966, the second film Dr. Goldfoot and the Girl Bombs is released, and opens with clips from the first film to bring anyone, if they care up to speed. Dr. Goldfoot and the Girl Bombs, although an American-Italian co-production is filmed in Rome, with the interiors filmed at the famous Cinecitta Studios and the majority of the cast and crew being Italian. Price returns again and this time he is supported by another bland teen heartthrob, Fabian. The plot, not that it matters has two inept detectives (dubbed Italian actors) investigating why European generals are blowing up in advance of a NATO meeting due to be held in Rome. It transpires that this time Goldfoot is sending his gold bikini clad robot girls in as human bombs to seduce and kill their victims once their heart rate rises! He is after control of the western powers to gain world domination. Please, spare me!

The production values for the films are poor, as are the special-effects for want of a better word. Made by American International Pictures (AIP), a studio synonymous with B movies, many of them starred Vincent Price and were directed by Roger Cormon. In the first film, Price even parodies his previous Edgar Allan Poe films taking Avalon on a tour of his underground lair, cum crypt with portraits on the wall of Price’s interpretation of Poe characters and even a clip from The Pit and the Pendulum (1961). Both these films present a low in Price’s career as he camps up his role, although he did achieve a higher level of camp with greater command in the far superior Dr. Phibes films and as the Shakesperean actor psychopath in Theatre of Blood (1973). To say that the films are sexist would be an understatement. Many have levelled this criticism to the James Bond films of the 60s and 70s but the Goldfoot films take this to a new low level; even the tags of the films, the first says in a speech bubble with an arrow pointing at a bikini girl, “THIS is a bikini machine” while the sequel states, “Meet the girls with the thermo nuclear navels!” These robot girls are mere automatons, scantily clad and with nothing to say but just a girl with a nice figure.

Perhaps, Price aside the only other thing of interest in both films are the directors: Norman Taurog and Mario Bava respectively. Taurog directed the first film; he had been an uncredited director on The Wizard of Oz (1939) and directed 9 of Elvis Presley’s 30 films. The director of the Italian film is Mario Bava taking a break from his series of interesting Italian horror films and demonstrates zero talent or effort for this film. Both films are released by 101 Films as DVDs and Blu-rays, both singularly and as a double bill with the latter containing an extra that stars Vincent Price in another AIP fantasy, Jules Verne’s Master of the World (1961) – a far superior film to the Goldfoot films. And that’s not saying much.