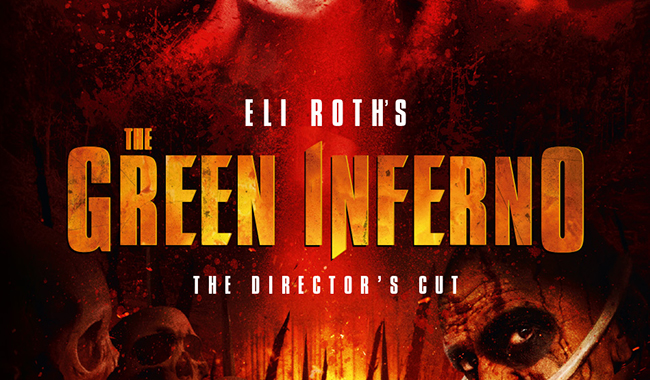 So we’ve had our fill of recent movies with Eli Roth’s name hanging from them like a car air freshener,   Produced by ELI ROTH, Endorsed by ELI ROTH, Watched by ELI ROTH, Spoke over dinner about this movie with ELI ROTH etc.. But since its UK premier at Frightfest in 2014, we now have the pleasure of watching an ELI ROTH directed, The Green Inferno.

The Green Inferno is a huge nod towards the Italian cannibal genre from the late 70’s early 80’s which the likes of Cannibal Holocaust and Cannibal Ferox helped make infamous during this time, with the Green Inferno actually being the working title of the Holocaust movie.

This obvious fanboy flick of Holocaust, sees our leading “dinner” lady Justine, caught up with a group of college activists who travel to Peru to stop the destruction of its forests and resident tribe. But after a horrendous plane crash which leaves half of the group dead, the survivors are captured by the tribe they were there to save and put straight onto the menu in a glorious and quite frankly gross fashion.

Mixed with intense scenes of the darker side of humanity and even darker humour, The Green Inferno is a pretty good effort in trying to recapture the feeling of the early cannibal film genre except with sometimes gut wrenching modern day special effects.

The film also has a real sense of authenticity too as actual tribe members from the area were used as cast in the film. All having never seen a movie before, yet alone been in front of a camera. There first introduction to cinema was actually ROTH playing them Cannibal Holocaust and by all accounts the tribe thought this was a comedy film.

If you are a fan of the genre or Eli Roth in general, then I don’t believe that this film will disappoint. It probably isn’t for those with a weak stomach or if you have just eaten as a most of the scenes from the plane crash onwards are pretty horrific and very well presented for a modern day horror with such a high profile release. (It’s even sitting on the shelves in your local supermarkets!)

So if you think you have the kahunas, grab yourself a steak dinner, rare of course, and a copy of the Green Inferno. Sit back and revel in the delights of the modern day cannibal movie, as its definitely back with a vengeance.