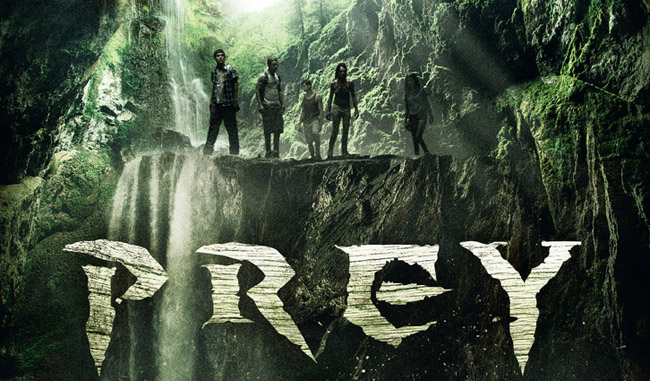 You know the drill. Five friends travel to an exotic location (Panama in this instance) to take in the sites and party with the locals. Said locals tell them about a remote beauty spot and, despite some disturbing legends and foreshadowing, they pack up their swimwear and head off to the slaughter.

Originally released in 2014 as Indigenous, Prey is pretty derivative. However it distinguishes itself in several ways.

Scott and company are prey to a chupacabra. Due to the budget (and because it helps with the, y’know, horror) the creature is barely on screen. Quick cuts, moving through shadows, distressing shrieks –  the reliance on practical effects is handled effectively. That is until the end, when the chupacabra (which is conspicuously similar to The Descent’s cave dwellers) attacks in the daylight, sporting a bizarre CGI tongue.

One of Prey’s primary strengths is its cinematography. This movie looks gorgeous, with some exquisite views of it’s beautiful locations. Night shots are competently managed, balancing what we need to see with the tone director Alastair Orr was shooting for.

Prey comes into its own during the last twenty minutes. Its established early on that Scott has pioneered a new social media app, which uses facial recognition to instantly upload videos to your every account. In desperation, he turns to YouTube for help. This aids Julio in directing the army to their location but, more importantly, the video goes viral; attracting millions of views and the drawing the world’s media to Panama.

This supercharges the movie with a disorienting, uncanny energy. Overall, Prey is unremarkable. For over an hour there’s nothing you won’t find in a plethora of other films, but the final act takes things into a fascinating, if disjointed, direction. It’s this, the decent characterisation and beautiful camerawork which earn Prey a recommendation – for novelty’s sake at the very least.