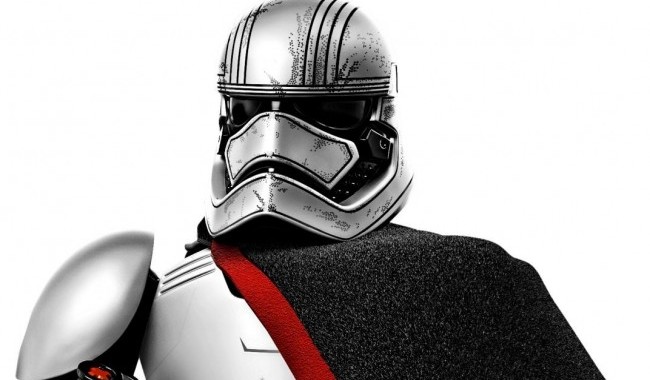 With the new Star Wars Buildable Figures series being very well received last year, it is no surprise that we have now received the second wave of these figures based on the Force Awakens movie. The line up of characters for this wave has Rey (75113), First Order Stormtrooper (75114), Poe Dameron (75115), Finn (75116), Kylo Ren (75117) and Captain Phasma.

Captain Phasma is an interesting subject, being a relatively minor character in the movie who is distinguished by her silver/chrome stormtrooper armour. Immediately from her inclusion in the trailers Phasma became a popular character and her ‘supporting villain’ role in the movie could well lead to her being the ‘Boba Fett’ of the new Star Wars universe. Her unique and distinguishing look is really one of the most iconic images of the new film so it will be interesting to see how she is used in the Star Wars films to come.

For the Buildable Figures Phasma then makes a lot of sense. Outside the unique moulded head on each, the Clone Commander Cody (75108), First Order Stormtrooper and Phasma really share pretty much the same pieces just in different colours. Phasma however rises above these two ‘clones’ due to her more striking look.

The low piece count of Captain Phasma really tells the story build-wise. There is nothing here that we haven’t seen before, but that doesn’t in any way lessen the appeal. The Buildable Figures series is not really a set to enjoy building. It’s value is more in play or display and the results are always great while the set can be put together in about half an hour without rushing. The ball-joint design also allows for very realistic poses meaning that you don’t just end up with a line of stiff, unlifelike figures.

The chest and helmet pieces are the only ones which have been printed on the figure. The chest printing includes some of her belt detail as well as some rank markings. These have been printed mainly in light gray to give the area a more three dimensional look but don’t really add anything else of interest. The rank markings would have probably looked better higher up on the chest, but all in all these are hardly noticeable details and do not make or break the look of the figure.

The helmet on the other hand has received a lot of attention. Not only does it appear to be a composite of different plastics to give the visor and the air vents a lot of moulded detail, the printing also does a good job replicating the markings on her helmet. Even better are the subtle weathering effects which make the helmet look battle worn and old. The piéce de résistance however is the wonderful non symmetric cape which drapes over her left shoulder with a sewn red seam just like in the film. The cape is also much thicker material than say the cape on the Darth Vader Buildable Figure and alongside the helmet this really makes the figure shine.

The final build is Phasma’s blaster rifle which is nicely designed with the requisite details including the long stock which separates it from the normal stormtrooper blasters. The blaster also has a trigger which allows you to shoot the new style flick fire missiles which clearly adds to the playability and doesn’t hurt the overall look in any way.

Captain Phasma is definitely a subject that makes for an excellent display or play figure. The colour of the armour is not chrome which takes a little out of the appearance, but the metallic gray still looks fine in its place and a true chrome colour would not have shown the markings on the helmet as nicely as this colour does.

Captain Phasma and Kylo Ren are definitely the most impressive figures of the new line of Star Wars Buildable Figures. Therefore if you already have a collection of these figures, I would strongly recommend adding this one to your line up. These two waves of Star Wars figures have really turned me around on the Buildable Figures in general and shown how good these kind of things can look. This is particularly true of the figures which are either robotic or wear full body armour and therefore the evil characters in the Star Wars universe are definitely the highlights so far.

While I still think General Grievous is the best looking Buildable Figure released to date, Captain Phasma is definitely worth buying. These figures are also very cheap by Lego standards and shouldn’t be measured by the usual price per piece method as the pieces are much larger and contain printed detail that just wouldn’t be possible in minifigures. Therefore I wouldn’t hesitate in trying these figures, even if in the past you have been doubtful about them.