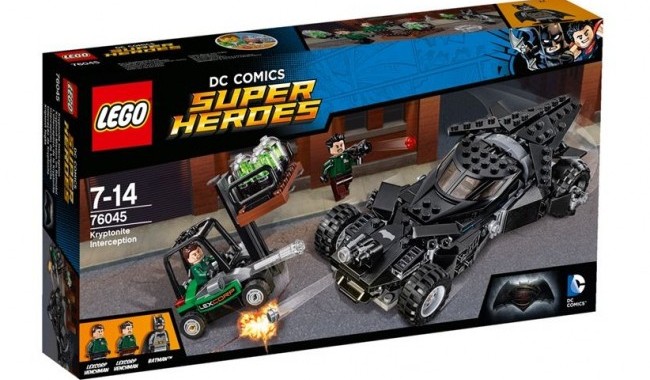 With the Batman v Superman: Dawn of Justice out in cinemas this week, it’s the perfect time to review one of the 2016 Lego sets that is tied to the movie. The Kryptonite Interception is the set that includes the new Batmobile alongside Batman and some of Lex Luthor’s henchmen who are presumably storing or moving Kryptonite in readiness for another battle with Superman. Having not seen the film yet, it’s impossible to say whether this is a direct scene in the film, but usually these kind of sets are loosely based on plot points that have been shared with Lego in advance. So, I wouldn’t be surprised if there is no exact scene with the henchmen carting pallets of kryptonite on a forklift, but almost certainly there is some point in the movie where Batman does try to capture kryptonite held by Lex Luthor.

The Kryptonite Interception is one of three sets released in tie with the movie. 76044 Clash of the Heroes is an entry level set with Batman and Superman meeting for a battle and 76046 Heroes of Justice: Sky High Battle as the name suggests includes Superman, Wonder Woman and Batman with his Batwing plane battling Lex Luthor himself in a helicopter over the skies of Metropolis. So out of all the Lego models, the Kryptonite Interception certainly includes the most compelling one in the form of the ever changing Batmobile.

When it comes to minifigures, the selection is perhaps slightly disappointing, though the number is what we would expect for the price point. We do get the new look Batman in his normal suit. (The armoured suit seen in many of the released images from the film is included in the Clash of Heroes set.) The figure is completely new, though clearly the same as in the Sky High Battle set. The cowl design now features shorter ‘ears’ and no covering on the chin. It is also subtly more rounded like in the new film although you have to compare the figures closely to be able to spot these differences. Batman’s suit is gray again as in the Dark Knight trilogy figures but now includes the new design Batman symbol on the chest alongside the belt and fabric detailing. The cape is now made of much softer fabric but otherwise appears to be the same design as previously. Finally Batman for the first time receives black boots depicted by dual colour leg design but no further printing.

The two LexCorp henchmen have the same uniform on the top, meaning the chest piece is the same but have different faces, hair pieces as well as different colour trousers with their uniform. The chest piece is very nicely printed on a green base with identity cars on the chest, pocket and collar detail as well as a big LexCorp text print on the back of their jackets.

The build starts with the henchmen and their forklift truck carrying a pallet of glass cases containing the kryptonite. The forklift design is very well done and looks the part. It would certainly not be out of place with some minimal modifications in any Lego City collections. The lift part has a rubber band holding the lift arm up, meaning it can be pushed down from the rear but will always spring back up. The rubber band does make the action rather stiff, and while the whole section has been made of one piece, it can come off the rest of the vehicle if you are not careful when pressing it down. The band can be removed though without any consequences apart from the lift arm no longer staying in the high position afterwards. Finally, I’m not sure even the most heinous supervillain would really think a pair of rocket launchers (flick fire missiles) are needed on a fork lift truck. These do seem a bit silly, but have clearly been added for an additional play feature so it seems petty to complain about this kind of thing in a children’s toy.

The Batmobile from the new film has been revealed by the film makers a long time ago, so we have a very good idea of what it will look like. The new design is somewhere in between the tank in the Dark Knight trilogy and the futuristic but very unwieldy looking design in the Tim Burton trilogy. The car is now much more sleek low design with large gull-wing doors , but retains the oversized wheels and visible weapons of a more rugged military like vehicle. Overall, the Lego design of the car is amazingly accurate. The wing design on the back is perfectly captured and the new design cockpit window pieces which are also used on the Batwing model perfectly capture the look and operation of the doors. The Batmobile is mainly built out of black pieces while the actual car looks to be more dark gray, but in Lego form this does seem to work better and never seems out of place. The nose of the car features the only externally seen sticker for the Bat symbol which would have looked much better printed but at least the car isn’t covered in them. Also, from the images released, it does not seem like the actual car has the symbol anywhere so perhaps this could have been left out. However, with the sticker design, at least every builder can choose for themselves if they want to leave it out. The only part of the design which doesn’t quite work out are the front wheels. The real car has large protective coverings on both the front and the rear wheels. In the Lego model, the rear wheel has some covering made up of small wing pieces but the front wheels are completely open. I’m sure Lego experimented with many designs to add these, but presumably nothing quite captured the look. The open wheels do alter the look of the vehicle quite a lot though which is a shame when the rest of it is so accurate.

The build of the car is probably medium difficulty. It shouldn’t cause any problems to anyone within or above the age ranges, but it does have a lot of detail and many movable, ‘floating’ parts in the various wings and coverings to recreate the look of the car.

The Batman v Superman Batmobile has been very nicely designed at a very reasonable price point, keeping the piece count of the set down to around 300 pieces. The new look Batman himself is also very nicely detailed and adds another great looking Batman to the Lego lineup. Clearly the rest of the set is somewhat superfluous but at least not a lot of the piece count has been wasted here and in addition the forklift truck despite the few problems mentioned is a welcome addition in Lego form.

At £29.99 this Batmobile is great value as either a display piece or a play set and I have no qualms about recommending this iteration of the legendary vehicle to anybody who enjoys the movie or the Batman universe in general.