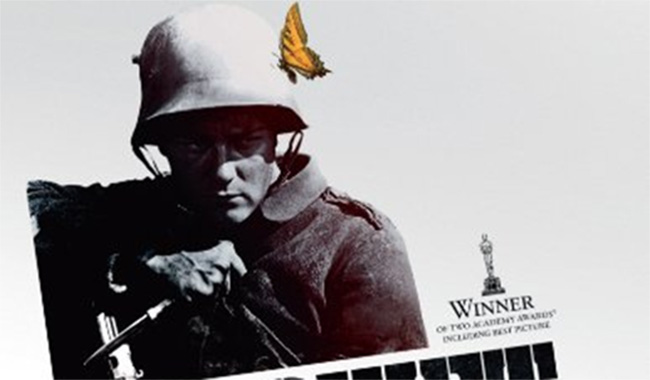 All Quiet On The Western Front Review

When Lewis Milestone adapted Erich Maria Remarque’s novel ‘All Quiet on the Western Front’ for Carl Laemmle and Universal in 1930, for many World War I still held fresh memories. The film stood at roughly the midway point between the end of said war and the start of the Second World War. The story itself is something of a benchmark in anti-war story telling and more tellingly from the perspective of a German hero. The film opens with patriotic fervor and a march through a German town at the outbreak of WWI. Boys in the local school are wrapped in the nationalist hysteria at the encouragement of their teacher who speaks of the heroism of fighting for Germany. Of course they sign up to the German infantry with only one who is reluctant to join up, but is soon convinced and after initial training they are sent to the front where the hardships of front-line army life in the war comes to the fore. They mix with hardened soldiers, frolic with local girls and meet the ire of their commanding officer. Throughout the rest of the film though they become de-humanised by trench warfare where they see rats overrunning the trench, lice, comrades die, dismembered limbs and the continuity of death as the natural course of things is symbolised by the changing owners of a single pair of boots. When the protagonist and central figure Paul Baumer (Lew Ayres) is given leave after recovering from his near death injuries, but Paul feels disenfranchised by his previous life, sad for his mother (Beryl Mercer) and angry at the hollow nationalism of his former teacher and runs back to the front early.

Made in 1930 All Quiet on the Western Front began production as a silent film with the intention of having synchronized sound but was converted to a sound film with dialogue after the start of production. The role of the mother was played by Zasu Pitts in the silent film before Mercer appeared in the sound version. As an epic war film no film had such well constructed action sequences or battle scenes until Steven Spielberg’s opening beach landings in Saving Private Ryan (1997). The ground tremors with explosions, mud and barbed wire flies through the air and charging soldiers fall and take shelter in muddy shell holes. The graphic description of body parts in trees and dismembered limbs on barb wire so apparent in Remarque’s novel is also visible in Milestone’s pre-code film. For the battle fields, Milestone re-created northern France on a California ranch where 1000 acres of land was turned into muddy shell pitted and trench laden fields with millions of gallons of water piped into to turn the fields into mud. The soundtrack too uses the whistle of whizz bangs and shell bursts and the crackle of machine gun fire. However, when there is dialogue, given that this is the beginning of the sound era, it is a little stilted and stiff as is the case with most films from the period.

There were other films made around the same time telling a similar and familiar story: there was Westfront 1918 made in Germany and Wooden Crosses in France (recently released by Eureka!). While both have similar qualities and both are good films, All Quiet on the Western Front had that extra clout in production and is still stunning today from its first battle sequences to the final grim shot of Paul Baumer in a trench reaching for a butterfly on an empty tin before being shot by a sniper. The final shot is double exposure of graves and the marching soldiers looking back at the viewer over their shoulders. Very powerful and unique in its day when most Hollywood films had to have a happy ending. Be under no doubts there is no such comfort in All Quiet on the Western Front. Viewed today this is still a powerful film and viewed on this disc with little in the way of marking on the screen it looks good. However, sadly there are no contextualizing extras or commentary on the disc.