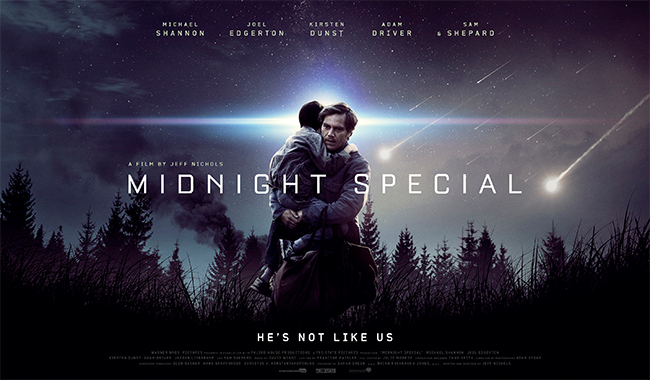 Jeff Nichols’ has a knack for bringing the weird and wonderful together, and Midnight Special is no different. His homage to the sci fi films of old comes with the director’s signature style, which we’ve come to know in his short career.

Here we have Michael Shannon’s Roy on the run with his son, Alton, an eight year old boy with a fascinating gift. Along with Joel Edgerton’s Lucas, best friend of Roy, they dash across the states as both the CIA, NSA, FBI and a religious sect are in tow. The chase is the greatest portion of the film, but it never feels overdrawn, while the finale may change the world forever.

Shannon is on top form as the father, in a story where the over running theme is family, and the lengths we will go to for the ones we love. We see how much he cares for his young boy, and will almost literally go to the ends of the earth for him. And, in keeping with Nichols’ other films, set towards the deep south of the United States.

Along with the hue that this brings, there are the gorgeous tracking shots as the party edge across the country, fist to pick up Alton’s mother, played by Kirsten Dunst in a harrowingly honest turn, then on to a location that has a great significance, of which we find out throughout the film.

There is a great amount of intrigue throughout, indeed much is not spelled out until the final moments of the film, but this only entices us further into the narrative. This is helped on by David Wingo’s supreme score, which drives the film almost as much as Nichols’ direction.

But the shining light, pardon the pun, is Jaeden Lieberher’s Alton. In a time when we are getting increasingly better child actors, Lieberher’s take on the scared child is something to behold. The character grows a tremendous amount over the course of the run time, and the actor does a great job of showcasing this as he learns what is really going on with him.

A stellar cast, great action, the most original use of night vision goggles in recent history, and a truly interesting tale makes Midnight Special one of the nicest surprises to grace our screens in some time, but was it really a surprise? Nichols has delivered in the past and his recent form has shown he is a director to be wary of. Maybe the surprise is that Nichols can keep giving, in an industry which is so constantly hit and miss.

Midnight Special really is something special, for lovers of sci fi, and for those who are into a heart felt family film. It has more layers than most, and more to give.