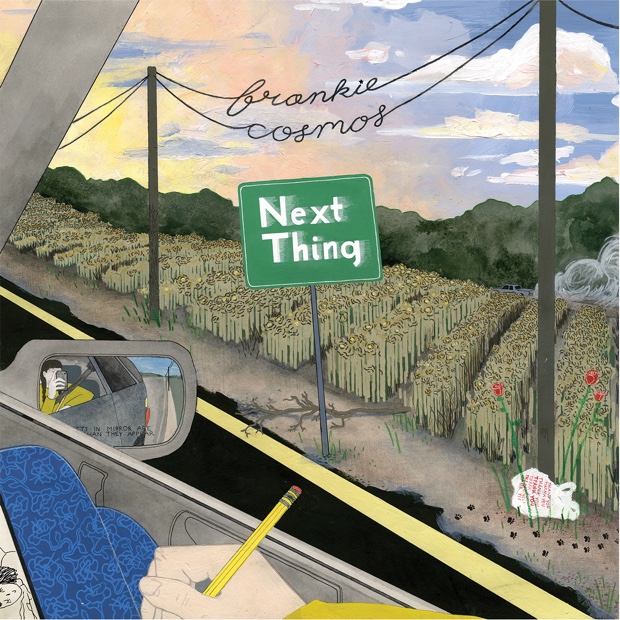 Greta Simone Kline, alias Frankie Cosmos, has done some great things with songwriting in her twenty-two years on earth. Having been musical her whole life, she began working under the name Frankie Cosmos in 2011, and released her debut Cosmos album as in 2014. Two years later, her second album is due for release with Bayonet Records on April 1st, aptly titled ‘Next Thing’.

‘Next Thing’ doesn’t stray from the chill, simplistic purity characteristic of Frankie Cosmos’ musical offerings. She has a distinctly melodic accent which pairs well with the prosaic lyrics of the fifteen songs on the album. This record is the ultimate in easy listening; it is a whimsical delight full of soft sounds and mellowness, with predominantly short songs telling short stories – you don’t need your brain to be too switched on to keep track of it. There’s an almost childlike innocence to the whole album, which is reflected in the sing-song nature of its simple wording reminiscent of nursery rhymes (especially notable in the final song, “O Dreaded C Town”: “I don’t know or care to know / I don’t care or know to care”).

The album opens with “Floated In”, which really does float in – it kicks us off with a daydreaming summery vibe which is continued throughout the album. Faster songs alternate with slower, evident from the get go: the album’s second song “If I Had a Dog” has a fast, vaguely anxious beat with accusatory lyrics “everybody says your decisions are OK / but here’s a better idea”; it’s then followed by “Fool”, which is more languid, with bittersweet lyrics: “you make me feel like a fool / waiting for you”.

“Outside With The Cuties” is great: it’s exactly as though Frankie Cosmos is at a party somewhere and has decided to document in song exactly what she’s seeing and feeling in an endearingly earnest and sweet fashion: “I don’t think the woods are too deep / The grass covers the sand / All the wood is damp”, “Feeling very touched / Cos all my friends are in love”. This particular sense of immediacy (and winging it) is amusingly evident in the lyrics “I haven’t written this part yet / Will you help me to write it?”

Another stand-out song in “Next Thing” is “On The Lips”. The song combines uncomplicated lyrics with a striking chorus involving sudden reduction of instrumentation and crystalline harmonies, and taps into the universal theme of mourning that which could have been: “I know you could’ve kissed me / but I’ll have to wait”.

There is no doubt that Frankie Cosmos is supremely talented in her field, and a great deal of her intrigue lies in the very impossibility of qualifying her music. She is perhaps best described as a fascinating artist simultaneously young for her age and old beyond her years, summed up in her own words in “What If”, the penultimate track of “Next Thing”: “when you’re young you’re too young / when you’re old you’re too old”. This review has used the word ‘simple’ a lot to describe Frankie Cosmos’ lyrics, but that’s not to say her music lacks depth. “Next Thing” is the sum of her inexplicable quality, both young and old, and both pared-down and complex.