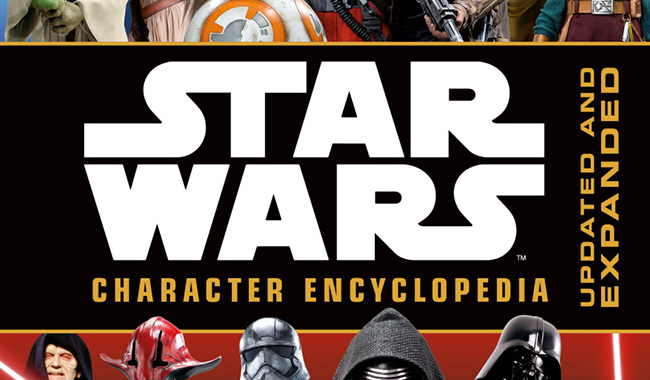 Dorling Kindersley have had the Star Wars book market covered for years, either Star Wars proper or in the Lego parody spin-off. The latest addition, the ‘Star Wars Character Encyclopedia’ is an updated and expanded version of their 2011 original book and now includes some 217 characters from aliens, monsters and droids to the main characters from all seven films to date (including references also to ‘Clone Wars’ and ‘Star Wars Rebels’). As usual there is page after page of colourful illustrations with caption text as well as a brief biog and maybe even a caption as to their fate or the moment in the saga any individual character is best known for. There is equal weight given to Darth Vader as there is to any musician in the Mos Eisley canteen or inhabitant of Jabba’s palace. This means that many of the characters are fleshed out and randomly made up for the younger audience and the more trainspotting geeks out there. For example who knew that Lyn Me was the name of the sexy green dancer of Jabba’s Palace on Tattooine as seen in Star Wars Episode VI: Return of the Jedi. Or who knew that Lyn Me was a Twi’lek of an enslaved people who hero worships Jabba? The fate or back story of many of the main characters is of course a given but only goes to show what a nerd’s paradise this book is.

Therefore, most definitely for the younger viewer this book is a perfect read/glance/reference book. Of course there are many other similar books by DK, both Star Wars related or otherwise. This book also includes creatures and monsters such as the Sarlacc worm living in the pit, also from Episode VI as well as the Happabore, the giant pig-like creature from the recent Star Wars Episode VII: The Force Awakens who Finn must share his trough with. What is missing of course are all the space craft, transporters and vehicles all of which are covered in another DK as well as all sorts of other permutations of characters, things and objects as well as the usual ‘everything you want to know’ books. I did find that this was a book I couldn’t put down being the nerdy Star Wars fan that I am.