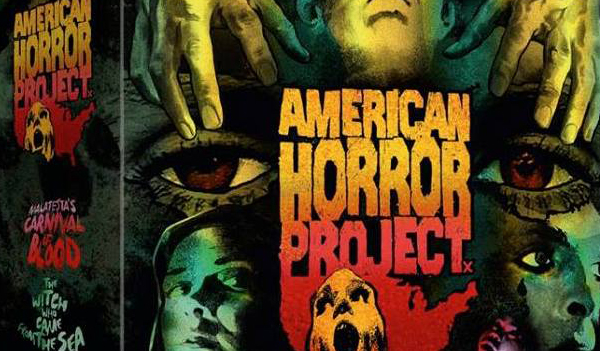 The first in Arrow Video’s collection of old long forgotten horror films being unearthed and worth re-visiting titled the American Horror Project Volume 1 is a collection of three such films, all from the 1970s. They are: Malatesta’s Carnival of Blood (1973), The Witch Who Came From the Sea and The Premonition (both dating from 1976). They are packed to the gunnels with extras and contextualising documentaries and interviews and in themselves are a historical document to these films from the underground and while the quality of some of the films is questionable, their relevance and that they should be considered ripe for re-assessment is correct. This most definitely marks Arrow Video as the front runner of cult cinema DVD/Blu-ray release.

The earliest of the three is the distinctly grindhouse Malatesta’s Carnival of Blood and features a bizarre carnival in which a family are searching for their missing son who, they believe was last seen working at the carnival before he disappeared. It turns out that the carnival is run by the strange Dr. Blood and most the carnival’s workers are ghouls. A series of murders then begin to happen. One of the bizarre carnival freaks is the diminutive Hervé Villechaize, better known from the popular 1970s TV series ‘Fantasy Island’ and as Nick-Nack in the James Bond film, The Man with the Golden Gun.

The other two films, The Witch Who Came From the Sea and The Premonition it can be argued as not horror at all but as psychological thrillers. But both films are filled with many horror elements that a fan of the genre can happily include them under the horror label. The latter certainly has many moments that would make the viewer jump and would stand out against any more recent film. The story is about a mentally ill woman who with the help of a handsome psychotic dancer in a carnival plan and carry out the kidnap of her daughter, now a young girl from her adopted nice middle-class family. A psychic with horrific visions is used to track them down. The horror of the visions is to the credit of the film’s director, Robert Allen Schnitzer using the low budget economy of the film to good effect.

Arguably the best and most intelligent film of the three is the long since forgotten The Witch Who Came From the Sea that again deals with mental illness and childhood trauma. The lead in this film is Millie Perkins, an actress better known when she was much younger for playing the title character in The Diary of Anne Frank (1959). Her once Audrey Hepburn looks have faded but she plays her mentally disturbed character here in a much nuanced performance. The film opens (with a very 70s mellow soundtrack) on a deserted beach where she is seen looking after her beloved nephew and niece. Molly, though is haunted by her fond memories of her father, a salty seaman that were tainted when he raped her as a young girl. Due to the disturbing nature of the rape scene the film was banned in the UK. Molly’s nightmare hauntings lead her, unbeknownst to her, to murder in a male suitor she has coital relations with.

Each of the discs are loaded with extras, interviews and contextual material well worth watching in order to uncover a lower rent end of filmmaking that has some historical value. Although The Premonition looks cleaned up, the pops, scratches and lines on the other twofilms do add some atmosphere to their low end status; as refreshing as the pops and scratches of an old vinyl record. Here’s to ArrowVideo releasing more similar films with a Volume 2 expected soon.