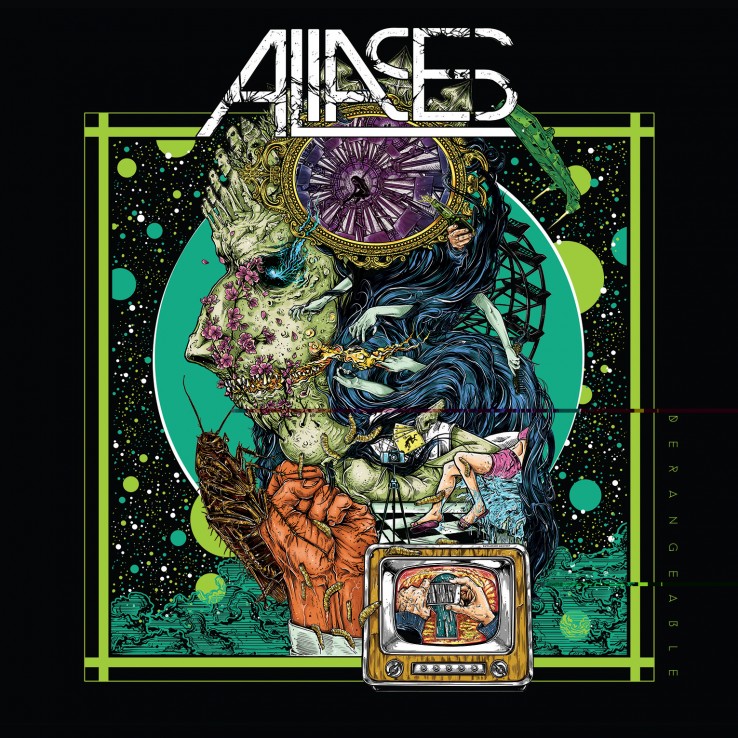 Fans of Aliases have been chomping at the bit for new music since the band released their debut EP, ‘Safer Than Reality’ back in 2011. After going through some member changes and bringing in new vocalist Joe Rosser, they successfully managed to smash their targets on PledgeMusic and get the album funded. Being the band that Pin (Guitar) started after the much loved and short lived tech metal icons, SikTh, there’s a weight of pressure here.

It’s impossible to not think of SikTh when listening to ‘Derangeable’ which can add to those already big expectations. The similarities are obvious with the manic dueling guitars, unusual time signatures and array of strange vocal sounds but Aliases are very much their own band. Right from the get go, Rosser let’s you know that he’s up to the task of fronting this band. He ranges from the sound of a mad man having internal arguments with himself to a clean voice that wouldn’t be out of place on an A Day To Remember album. That duality of crazy and collected is a running theme throughout the record.

Musically, it’s fair to say that it’s less frantic than the bands earlier work but that certainly doesn’t mean that there’s a lull in aggression or technicality. The guitar work is on point for the most part and it’s not hard to imagine Pin and Leah (Guitar) trying to out do each other while laying down their riffs. There are quiet sections that come as a nice change of pace and in some ways boost the impact of the heavy sections as they inevitably come spilling out.

Towards the end of the album opener, ‘Find Where You Hide’, you’ll find a surprisingly fitting saxophone solo and on a couple of other tracks, subtle electronics. Admittedly, the samples sound like they are borrowed right from Enter Shikari’s library of sound effects but they are thrown in few and far between and compliment the sections they show up in. Clear signs that the band aren’t shying away from throwing whatever they want into the mix.

Rosser seems to take more cues from Enter Shikari front man Rou Reynolds when delivering some of his strange and almost humorous lines in ‘Uncontrollable Desires’. There are moments on this record where Aliases dial things back and on songs like ‘Back To The Start’ and ‘Face For Lust’ they even flirt with straight up radio-bothering hard rock music. It’s clear that the band aren’t afraid to write hooks and to incite potentially massive sing-a-longs which may be an indication of where the band plan on going next.

The album closer, ‘Above The Sky’, hints towards a more ethereal vibe and rounds off the record in fine form. Overall, this record doesn’t dip in quality throughout but at the same time it doesn’t quite reach the heights of some of the other bands in the scene. It has moments of instant accessibility for a casual listener and plenty of depth for the more fanatical tech-metal fans. The return of SikTh may slightly over shadow this record and it’s not completely essential listening, but ‘Derangeable’ is sure to please everyone who has been waiting so long to hear it.