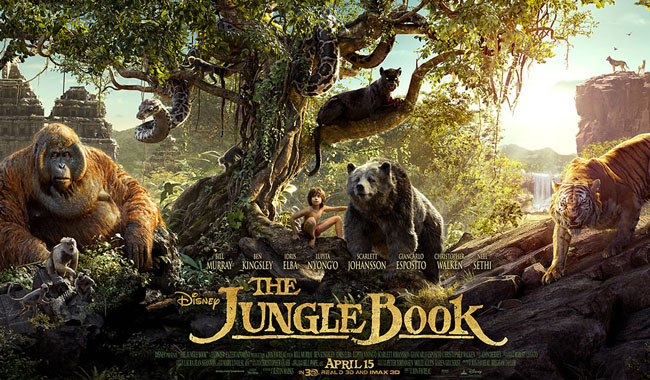 The king of the swingers strolls back into town, but this time in live action form.  Much like Ken Brannah’s live action update of “Disney’s” Cinderella, this one cuts it very close to the cloth.  Sure there are less sing-songs , but the music at the very least reminds you of each tune (but rest assured that you still get the “Bare Necessities “ and “I Wanna Be Like You” performed out loud (In fact the last one you get again over the end credits for good measure)).

Yes Young Mowgli (the prime resident human character of the film) has been raised but wolves, and glanced at under the careful eye of compassionate panther Bagheera (voiced by Ben Kingsley) until one day when Sheer Khan returns to claim his stake on the land (a fairly commanding Idris Elba (but for fun’s sake they should have cast Cumberbatch)).

So it is decided that Mowgli the man cub will stroll back to the town of his own ilk, but not without having a few fun adventures of his own and the wrath of a Tiger to deal with along the way.  And it’s at this point that the gloriously built world of Jon Faverau’s live action model loses a large chunk of its novelty and is short-changed for the episodic nature of the story – Enter the Snake, the Elephants, the Bear and so on.  Sure the guest vocals are sometimes a treat, but it’s all a bit familiar and lacking.

For newcomers to the story it should be a more engrossing affair. The world itself looks great the music (even when it isn’t paying homage to the classics is captivating. But there is still that divide we sometimes fear not just between Real life interacting with CGI life, but mainly that horrendous rip you from the experience threat of young ill-experienced actors having to do that job.

It never convinces on a dialogue level in this regard so it is never in danger of exceeding the reputation of the original. But the opening 20-30 minutes of so will work its best to convince you that it most certainly tried its best!

Of the voice cast Bill Murray seems to be winning praise for his “hippie” Baloo.  But money is on people talking more about Christopher Walken as King Louie. Not just for the serious case of miscasting compared to the cartoon, but for his fully invested rendition of “I Wanna Be Like You,” TWICE!

Well worth it for families looking for some decent entertainment. If you want something a with a bit more edge, and the nerve to do the animals without voice-overs then check out Stephen Sommer’s 1994 rendition (Also bankrolled by Disney starring Jason Scott Lee, Sam Neill, Cary Elwes and a very young Lena Headey). It doesn’t feature any of the songs, but does have a to-die-for soundtrack score by the late (GREAT!) Basil Poledouris. File that one under “under-rated”.

And who is playing favourites? Disney get your money either way!