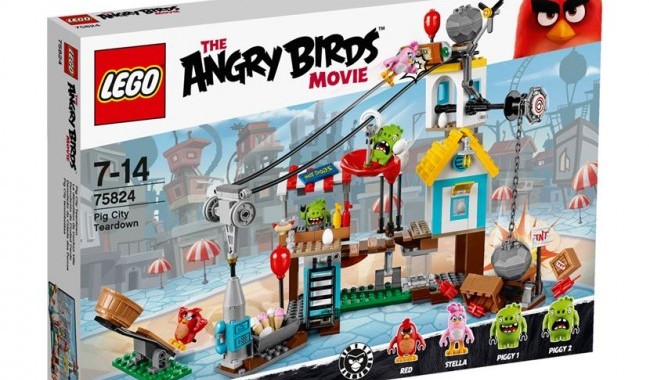 With the Angry Birds Movie about to premier in early May we are getting yet another new movie tie-in Lego release. The Lego Angry Birds Movie theme consists of 6 brand new sets which are presumably based on the movie locations, but also look very familiar to anyone who has ever flicked a bird towards the pigs in one of Rovio’s super successful smart-phone games. The Pig City Teardown is right in the middle of the line up based on price and part counts and really was the one that most reminded me of the game in look and feel.

The set consists of a catapult for throwing the birds and a section of the Pig City. Not only is the set a likeness of the game and movie, but it also functions as a flicking game by itself and therefore the city has been filled with purposefully ‘breakable’ parts that can be set off with hits. The roof of the hot dog stand can be toppled over, the bridge in the middle can be knocked down by hitting the balloons on the bridge, the upside down umbrella can be set sliding down by hitting the rock on the roof and best of all, by hitting the small propeller you will release the rock to fall down on the TNT crate.

The four minifigures are just about enough to facilitate the game as well, though ideally you would really have twice as many to ‘man’ all the targets with piggies and have a few more attempts at it as well. The minifigures as expected are completely unique and fully moulded pieces with no normal minifigure parts aside from the arms on the piggies.

The first of the birds is the main protagonist of the Angry Birds Movie, Red who appears as one of the first basic red birds of the game. The second is Stella who is one of the most recognisable characters in Angry Birds having actually received her own spin off game. Both birds are very nicely done and the detail on them is just about perfect for a Lego minifigure. They both have custom arms that are slightly wider with some feather details to better represent wings. Stella’s beak is interestingly not moulded in plastic but instead in rubber, presumably to better survive any impacts that might come from playing the flinging game.

The two piggies are identical moulds but with different faces, one with a grinning face and the other with a surprised or scared face. As you can expect from Lego, these custom figures have again been perfectly created and look exactly like the movie and game characters we know.

The build of the city is fairly simple. Obviously, there is a bit more verticality to the Pig city design than your average Lego set, so some caution has to be taken in building it, but overall the design is very sturdy and should pose no problems if you have any Lego experience. The function of the game objectives mentioned above I feel were not terribly well explained in the instructions, but once the set is together it all makes sense.

As you can tell from the pictures, the set is nice and colourful and includes many interesting details. One of the most talked about is the brand new piece that is a Lego hot dog bun! The ingenious design actually uses the standard red sausage piece to create a hot dog for the stand that looks great. It’s a shame that we only get one of these pieces in the set though, but  I’m sure we are going to be seeing this piece a lot more in the future.

The Pig City Teardown set then is an interesting combination of a movie tie-in and a standalone game that can be played with the pieces. This I think is the perfect way to capture what Angry Birds ultimately have always been about, so I couldn’t think of a better way to make an Angry Birds set.

It must be noted though that the game is not quite perfect. On my limited tests, I found it very hard to get the birds to hit the targets at the top of the tower, as the catapult tends to sling them at a much lower trajectory which is perfect for the bridge and the hot dog stand. It can be done, but then requires a lot more force which is sure to sling the birds meters away from the playing area if they don’t hit. Also, the two targets higher up are a little too close, in that any hit to the area is really almost bound to get both. While this is not a big problem, it does effectively lower the number of targets for the game.

Overall though, the characters and the game do make the set a very enjoyable variation to the usual Lego sets. The question remains as to whether the set and the film have arrived too late for their target market, considering it is definitely a few years since the heyday of the Angry Birds franchise.  Whatever happens though, this set and the theme certainly represent another interesting and fun footnote on Lego itself and I wouldn’t be surprised if the design ended up inspiring other Lego games of this type. We could end up seeing a purpose for all those flick-fire missiles yet!