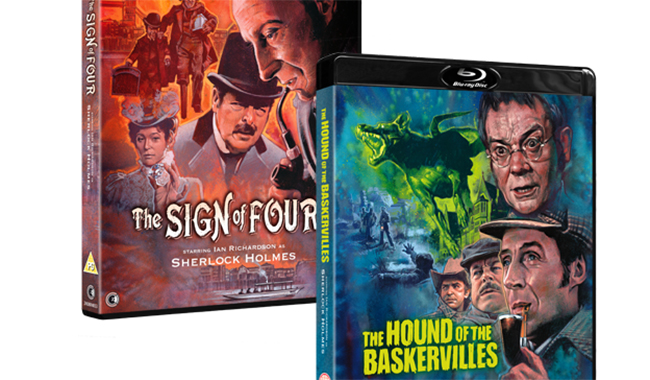 Second Sight are releasing two Sherlock Holmes films in both Blu-ray and DVD formats. The two films released, among many adaptations of Sir Arthur Conan Doyle’s eponymous and iconic hero detective are two 1983 TV movies The Sign of Four and The Hound of the Baskervilles shown on ITV in the November and December of that year. They are faithful to Conan Doyle’s character and stories, or certainly the big and small screen adaptations of Holmes that we have become used to seeing over recent years. In recent years the Sherlock Holmes character has seen something of a makeover, what with Robert Downey Junior’s steam punk Holmes, Benedict Cumberbatch’s recent outing or even last year’s Holmes in which Ian McKellan played an ageing Sherlock Holmes retired to a cottage and clearly near the end of his life. These films though are not a re-evaluation of the character but very much a traditional and faithful telling. ‘The Hound of the Baskervilles’ of course has been filmed on many occasions with Peter Cushing taking on the role for the gothic 1959 Hammer version and before that Basil Rathbone’s classic 1939 Hollywood version, again atmospheric in its gothic fog bound sets. Yet Rathbone’s later Sherlock Holmes films for Universal were all set in the contemporary present day as Holmes battles Nazi agents and murderous relatives.

Ian Richardson, who plays Sherlock Holmes in both films is perfectly cast as the iconic character, complete with the requisite profile and deerstalker. He plays Holmes in the traditional manner, while Holmes’s side-kick the normally bumbling Dr. Watson is played by different actors in both films: David Healy and Donald Churchill. There is little difference between the way both actors play the same character, even if not as bumbling as Nigel Watson’s more comic Holmes in the Basil Rathbone outings.

The Sign of Four is the least accomplished of both films; it looks cheaper and does not have as strong a cast as the other film. The story was Conan Doyle’s second novel and while it is a well known book it is one that has been adapted less. The story concerns a young lady (Cherie Lunghi) who comes to Holmes at 221b Baker Street with a story about a rare diamond from India and her father who went missing some 6 years previously. On investigating there is a connection with a fairground and its mysterious wooden legged barker and a cannibalistic midget connected to a series of gruesome murders. The Sign of Four is a clue with regards revenge and the search for jewels connected from an Indian past and references to the East India Company. Richardson’s Holmes spouts out plenty of cliches – “the game’s afoot Watson” and so on, but is enjoyable Victorian pulp climaxing in a chase down the Thames and under Tower Bridge (with some very obvious modern tower blocks behind).

The more accomplished of the two is The Hound of the Baskervilles; probably the most oft filmed Sherlock Holmes story and making for some good fog and bog locations in Devon and fulfill the correct expectations one would expect from a Sherlock Holmes tale. The story, for those who don’t know it surround a curse that has befallen Baskerville Hall. Charles Baskerville has been murdered by a legendary large glowing hell hound with his throat torn out. Meanwhile Sir Henry Baskerville (played by Martin Shaw with an awful dubbed American accent) arrives back in England to claim his inheritance. He too becomes the target for the ‘curse’. Holmes tasks Watson to escort Sir Henry to Baskerville Hall while he is in disguise living on the moors as a tinker. It is good gothic stuff with better production values than The Sign of Four and at 100 minutes about the right length. The cast too is stronger than the other filmed including Brian Blessed, Connie Booth (from ‘Fawlty Towers’), Nicholas Clay, Eleanor Bron and Denholm Elliott among the cast.

True, both films look dated, even by 1983 standards and both were produced by an American from HBO, Sy Weintraub and intended them to be a series of 6 similar films. Alas only these two films were made before Jeremy Brett became the familiar Sherlock Holmes on TV. Unfortunate that they were not made as Ian Richardson, better known as the Machiavellian Tory chief whip Francis Urquart in the successful TV drama, ‘House of Cards’ does a great job as a traditional Sherlock Holmes. There are no extras on either disc.