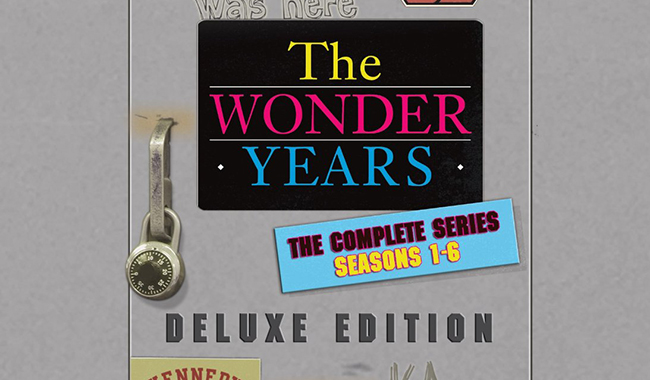 The Wonder years complete boxset comes to DVD this month – and it’s a whopper! 26 discs make up for this 6 season deluxe edition. All 115 episodes are present and correct, the entire music back catalogue from the original broadcasts is included (and we are talking a broad range of classic here) and on top of that you get well over 23 hours of bonus material!

American suburbia to us over here looked like the Wonder years. A middle class family featuring a son who had to endure all sorts of growing pains as a kid. It was relatable, funny and often charming.

The show may have dated slightly in terms of look and soft focus, but it’s still an astonishingly well crafted show, and is literally a moment in time for television. It may not have the modern eras technology on or behind the camera, but the relationships are well crafted. The mother, father, bullying older brother, best friends and girls encountered are all relatable constructs for Kevin Arnold to endure throughout the various seasons of the show.

Considering the original video quality, the picture looks fine – It won’t ever be a great looking picture but it’s clean enough for any fan to endure. The audio gets a slightly better job.

The extras however is full of many a treasure. Interviews with the creators, a cast Reunion feature, outtakes, 10 brand new featurettes on various aspects of the show and a booklets on each of the seasons filled with show notes.

This is a gold mine for any fan of the show who has been waiting for it to show up!