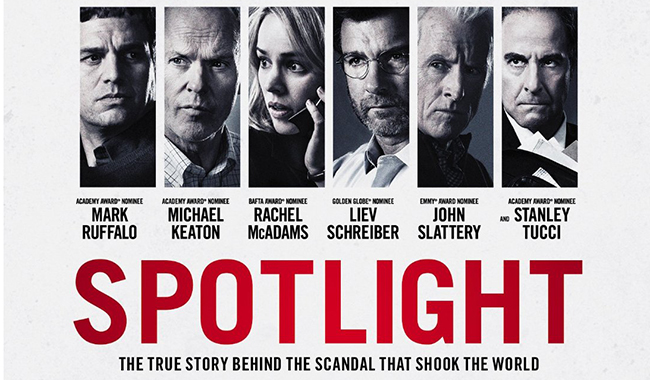 The film managed to take the Screenplay and best picture award. Mark Ruffalo, Michael Keaton and Rachel McAdams head up the cast about the exposure by Spotlight (a section of a leading Boston newspaper) that exposed truths behind the abuse of children by priests within the catholic church.

At first glance this could be a by the number procedural at a newspaper. A story leaks out, it’s picked up, spread among the staff and then orders are handed down to do their investigative work; join a few dots later and do the write ups with a few legal personal issues along the way to add weight to the drama of exposing the issue as a whole.
What is mind blowing is the facts they dig up and how much they had been ignored up until that point. It’s that and the professional cast gathered in the telling of this story. This is a true character actor film working to tell the story in the best way possible, and in a way reminds you of other great ensemble works from previous decades.

Extras are worth a look as well with an engrossing commentary among them.

Spotlight may not strike you as a film that is as great as it is, but it does linger in the mind long after.