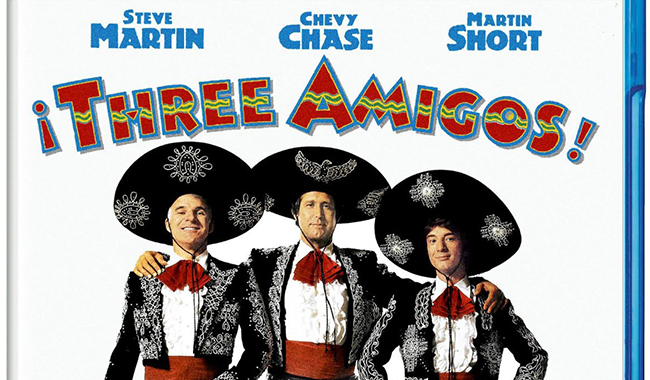 101 have picked up the distribution rights to this 80’s comedy classic.  And by that we mean the audience loved it that saw it, it picked up points on video and DVD and has since gone on to become a well loved classic that magazine does features about – BUT in its day the critics largely didn’t get it and dumped on it like the fools they were.

Steve Martin 9Also a writer on the film), Chevvy Chase and Martin Short play the titular characters. Three Hollywood actors at the dawn of cinema making a life for themselves as the onscreen classic fight team the Three Amigos!

Sadly – down in Mexico where real trouble is brewing, citizens of a small put upon community take these silver screen adventurers to be the real thing and promptly seek to enlist their help against a real group of bandits that threaten their very lives.

Sadly due to some miscommunication – the recently ousted actors take this as an opportunity to make some quick bucks. And that is just the start of the comedy – the mistaken identity; fish out of water routine is run its course in this film and largely to jokes and humour that will agree with audiences.

The charm and charisma of the leads works some of their best magic. Chase playing the slightly dumber member of the team works a charm, as does Martin’s more stressed leader of the gang as they go up against bandits, rude canteen patrons, singing bushes and the gentle folk they have come to the “aid” of.

Sadly there are no extras on this release. But there are not many editions of the film with much of which to speak about. So it’s as vanilla as you are going to get in the UK, without much of a better offer to go for.  So with that in mind it’s worth getting if you don’t have it already.

If one decade knew what it was doing in terms of making comedy great it was the 80s – and this is a prime example of it working well – not to mention well under that horrid 2 hour mark many of them cross today!