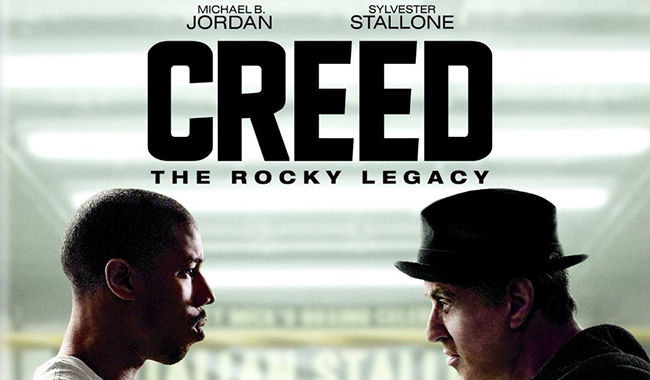 Rocky fans jaws hit the floor in disbelief when Stallone had to nerve to announce a “spin-off” movie based on the son of Rocky’s first opponent Apollo Creed. And this wasn’t too long after he seemed to have closed the book on the subject with the well receive and warm hearted sixth Rocky movie, Rocky Balboa. Hadn’t he said all he needed to say about the character at this point?

But it wasn’t until well into the production of the film, and the eventual appearance of trailers for Creed that anyone took it seriously.  Director/Writer Ryan Coogler was the one with the ideas.  Stallone it seemed was only needed in an acting capacity this time round. And then Coogler also invited actor Michael B Jordan to step in as Adonis Creed, the troubled youth who likes to fight.

Turning this from what seemed like a cash grabbing joke into what eventually became an Award winning film, mirroring the soul of the original Rocky film is something of a modern day true miracle.

Creed knocks on the doors of pretty much all the previous films.  Naturally the first four that featured Apollo are mentioned in terms of the competitive nature of the fights. The third is mentioned in respect to the behind closed doors fight that Rocky and Apollo fought (and even gives viewers an answer to who won that fight!). Rocky VI is addressed as this is where we lost Apollo.
Rocky 5 isn’t mentioned so much in terms of plot, but it is mirrored in the sense of Rocky taking on the role of trainer and mentor to a young fighter (and admittedly done much better here – which goes to show you that there is a thin line that filmmakers sometimes walk between what will end up good or bad for audiences). And the sixth film is where we found Rocky in later life with his restaurant and the loss of his wife.  Here he is still there. He still mourns his wife and also his brother in law as well. It’s to Coogler’s credit that he has shown so much acknowledgement and love for the entire franchise, and it’s why Creed works as effectively as it does.

And as good as Jordan is (sorry but he doesn’t comes close to Carl Weathers perfect figure), man of the match has to be Stallone. Even in a supporting capacity Stallone drives it right home. Rocky Balboa is as loveable and full of heart as he ever was. But that line of sadness that follows him around will grab Rocky fans and squeeze their chests hard. Stallone was quite simply robbed at the academy awards this year, but thankfully picked up honours in various other awards spots around the globe. In the years to come it’s clear that this will be the talking point of that category.

There are not many extras. A couple of featurettes that soak up the genesis of the story and how writer/director Coogler got involved. Beyond that there is 20 off minutes of deleted scenes that pad the characters out a little more, but nothing you’ll really miss from the already over 2 hours running time movie.