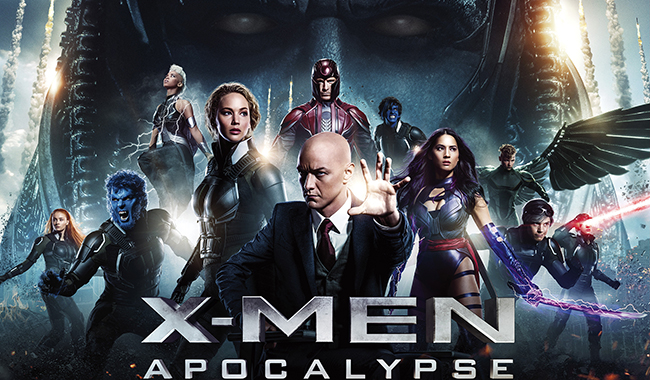 “I think we can all agree that the third film in any franchise is the worst” utters Jean Gray, a direct stab at X-Men: The Last Stand, the much maligned third film from when director Bryan Singer first bowed out from the franchise. He’s back once more, following the success of Days Of Future Past, and winding up for a swing and a miss.

It is the exact sentiment of Jean’s statement which gets into everything that is wrong with X-Men: Apocalypse; it spends too much time harking back to adventures previously explored, be it in flashbacks or simply retreading old ground. Once more we go back to Weapon X, inexplicably and for no reason other than to shoehorn a cameo. Once more, we have a popular mutant who has shied from past demeanours with a family and a farm, only for that to end in tragedy. And once more, we have a forgettable, underused villain.

The returning cast of Fassbender, McAvoy and Lawrence head up the somewhat ensemble as powerful being, En Sabah Nur (or, Apocalypse), wakes up from his eternal slumber and decides to get right back to it. Seeing the world as it is and how we as a species have fallen, he recruits four mutants as his henchmen, and sets out to conquer the earth.

Enter the X-Men; some old, some new, some recast, who have taken on the responsibility of defeating En Sabah Nur. Many of the young students have yet to truly understand their powers, but the world needs them again.

This globetrotting adventure sees us visit Egypt, Germany, Poland, but sadly we never feel like we go anywhere as the story plods along. It seems like Singer tried to give us the film we missed in his absence, a weird mesh of The Last Stand, Origins: Wolverine and a godlike opponent.

That godlike opponent is portrayed by Oscar Isaac, a man who is known for scene stealing and generally quite bankable. This isn’t the case here, as his means to an end are somewhat messy, never really thought out, simply ticking boxes as far as bad guys are meant to go. World domination? Check. Grandiose speeches? Check. Obvious disregard for everyone else’s wellbeing? Check. Costume straight out of the Power Rangers movie? Check.

But the real issue with this film is that Singer seems confident, perhaps even cocky. The film is made with a gravitas, as if he knows he has just made the best X-Men film to date. Apocalypse isn’t close to his best X-Men film, let alone the best one. Yes, the prodigal son returned and delivered Days Of Future Past, but that doesn’t give you an indefinite pass.

There are moments to look out for of note; the F-bomb now concurrent with these films gets the best laugh, Quicksilver has another stunning sequence, and is actually the highlight of the film. But overall, it’s easy to see the clarity in Jean Gray’s statement.