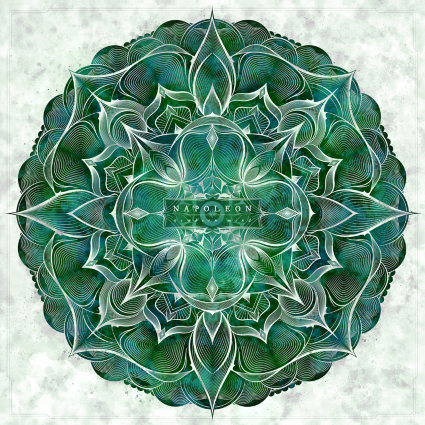 Another album that has been a long time coming is the debut from Exeter’s tech-metal/hardcore dudes, Napoleon. ‘Newborn Mind’ finally sees its release on the ever popular Basick Records which must come as a relief to both the fans and the band itself.

It would be hard not to mention similarities to bands like Architects when talking about the album especially in the case of vocalist, Wes Thompson. Not to discredit his ability which is pretty flawless throughout and the guy has massive versatility but occasionally you’d be hard pressed to not think Sam Carter (Architects, Vocalist) was providing a guest spot. That aside, the album rips from the start. The albums introduction ‘Dystopia’ is a short build that leads directly into the albums title track, ‘Newborn Mind’. The change is so fluid that you may not even notice. Thompson lets some of his clean range out here to great effect and shows what he is capable of. ‘Different Skin’ brings with it a slight melodic break near it’s end which doesn’t last long before the usual chaos ensues.

Where some bands rely on chugging breakdowns and low stomping chords, Napoleon’s guitar work sits way more in the ‘technical’ world. Frantic tapping, sliding and picking from the bands guitarist, Sam Osborn. His riffs and ideas are a real selling point for the band. Very impressive, creative and at times mind bending. That’s not to say this isn’t heavy though. There’s a constant chug throughout the majority of the album but it feels like it’s set back a bit so to give limelight to the leads.

The first half of the record is very dark in tone and when you reach ‘Maps’ you are given a very unusually light-hearted interlude track which sounds like a nod to CHON, a band who don’t seem to take themselves too seriously at all. You may be tempted to check and see if it’s actually Napoleon you’re listening to. The following track ‘Of Jams, Smokes & Promises’ sounds like the bands attempt at a pop-punk song and has a much more playful vibe to it as well.

‘Newborn Mind’ should satisfy those who have waited for it for so long. Upon first listening there may not be much separating the tracks but this may make you eager to scratch beneath the surface. The album doesn’t out stay it’s welcome either so makes repeat listens not only easy but fruitful.