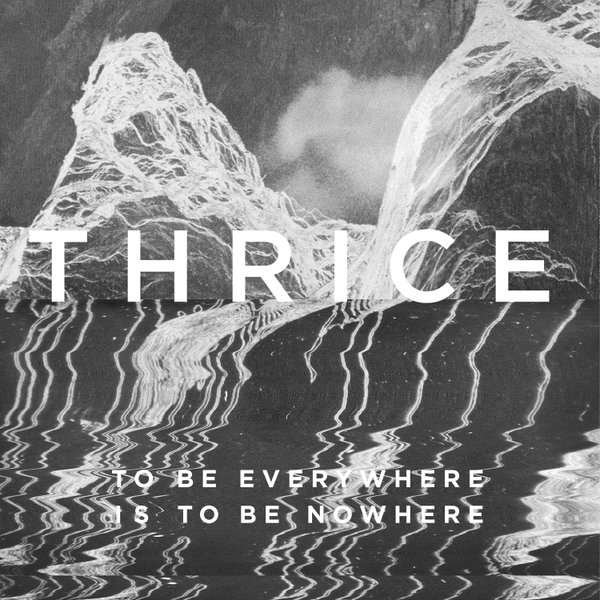 Thrice – To Be Everywhere Is To Be Nowhere

Another band, presumed dead forever, have risen from the grave in 2016. Thrice had a mostly wonderful career and it came to a premature end after the awesome ‘Major/Minor’ in 2011. You could argue that Thrice only improved with age and you would be right but could Dustin and Co manage to capture the magic and the spark that they once had? The answer is yes, yes they could.

With ‘To Be Everywhere Is To Be Nowhere’ it’s as if Thrice had never been away. Opening track, ‘Hurricane’ lifts off and let’s you know instantly that the lads aren’t messing around. After a brief fluttery piano and harsh acoustic guitar the track explodes with chunky chords and bendy guitar leads reminiscent of the bands magnum opus, Vheissu. Dustin’s weathered voice creeps in softly at first and it’s like being reunited with an old friend.

The first taste we were given of the new album was in the form of lead single, ‘Blood On The Sand’ which appears next. The track comes roaring out of the traps and ramps up the pace a notch with it’s thudding fuzzy bass and catchy chorus.

‘The Window’ comes along like a angrier Radiohead with it’s jangly guitars and echoed vocal paired with a sinister and dark vibe, like something evil is bubbling beneath.
The majority of the record is dark and serious but there are shots of other stuff in the mix too. ‘Stay With Me’ is almost ballad-esque but in the best way possible where ‘Wake Up’ see’s the band go a tad Nickelback for a moment.

‘Black Honey’ is up there with some of the best material the band has ever put out. It’s instantly memorable, has hooks for days and it brings the familiar stomp that the band have been putting their name to for years but in no way does it feel like Thrice are treading old ground. The album closes with the ethereal ‘Salt And Shadow’ which is a 6-minute stripped back affair that harks back to the slower moments on certain parts of ‘The Alchemy Index’.

All in all, ‘To Be Everywhere Is To Be Nowhere’ is a triumphant return and a fine addition the bands mostly stellar discography. The whole band is on fire but Dustin’s vocal performance in particular is outrageous on the majority of the album. Whether it be the political themes throughout or personal demons to blame, Thrice sound like a band reignited with passion and it comes across as genuine as ever.

Venue: To Be Everywhere Is To Be Nowhere
Support Band: Vagrant Records