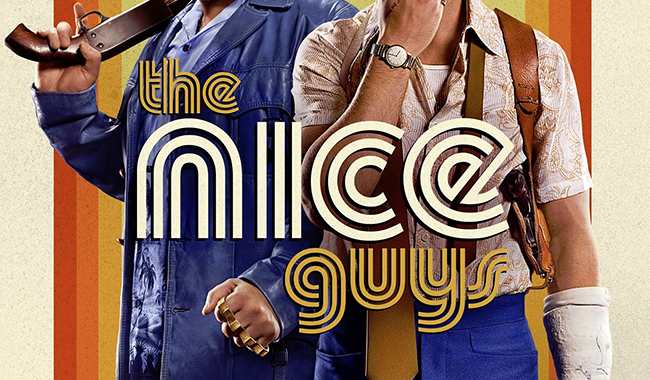 Shane Black is back in style once again – and not like anyone had any doubts that he could pull off an R-rated mismatched buddy movie with investigative powers. Yes here he is back in the same old well again – and as usual making audiences fall around laughing, breaking conventions and sewing it all together in a plot that barely makes any sense, defies logic and relies heavily on multiple good/bad turns of coincidence.

You will simply not believe the about of times that the right/wrong people just happen upon other characters in this movie. Nor will you care as it’s all simply doesn’t matter. Plot? Who needs it!

Cut to credits and the introduction of the lead characters. One (Russell Crowe) a guy paid off the books to beat people up. The other (Ryan Gosling) a shabby private detective. Their paths cross when one is looking for a teenage girl gone missing is then beaten up by the other (paid by said teenage girl to do so).

A few twists and turns later and both men end up working together to find the girl regardless and open up a mystery plot that Robert Towne would be proud of (or perplexed by).

Of course it doesn’t work at all if the leads are no good, and thankfully both Crowe and Gosling work well together. Crowe probably looking the most out of shape he ever has slides comfortably into the role of guy who can give as good as he gets, but also likes to walk a darker path, despite his good intentions.

Gosling’s single father on the other hand is a complete belligerent idiot. If he isn’t doing himself physical harm (An early incident involving an arm injury is floor dropping hilarious, as well as a bathroom stall incident between the both of them), then he is dropping lines of dialogue that often leaves his new partner concerned. Gosling has found new talent in the pratfall/idiot routine and he masters it here like it was second nature.

Ok so sure  there is a few annoying kids thrown into the mix – often outsmarting the adults (both the good and the bad guys).  But the level of excitement and enthusiasm coming from writer/director Black is hard to resist no matter how familiar you are with his own material to date.  Here he throws you off a few times and doesn’t always let the drama come to a happy satisfying conclusion.

The Nice Guys has plenty of action thrown in, but is a very talky film (and all the better for it). As much as we want more from Black, it wouldn’t be a bad thing for audiences if he just did this for the rest of his life. And it’s nice to have a summer movie for that adult crowd who are probably about hungry around this time after the success of Deadpool, but perhaps wanting a break from comic movies!

We just have to convince the nerds now that it’s important for them to show up for films like this when they are on the big screen, instead of satisfying their urge to see something else that they know if going to be a let-down.

You want better cinema?  Remember: your vote counts. And it’s always worth betting on Black.