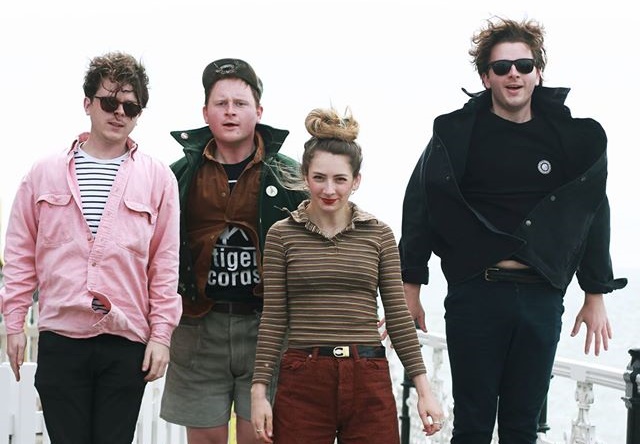 You may already know SuperGlu. singer Ben Brown from his relatively long established role as the leader – the term is accurate considering the 11-strong outfit more closely resemble a religious cult than a band – of waywardly experimental crew Dingus Khan.

His other, more recently formed band SuperGlu. are, at first glance anyway, more conventional and even (whisper it) commercial. They’re a classic four piece, with two guitarists, drummer and bassist Krista taking centre stage, tossing her topknotted mane of hair around as an effective way of punctuating a particularly energetic or emphatic moment in their music. Their songs are fast but never furious, rather enthusiastic and joyous, driven along by riffs and rhythms that toy with indie, punk and pop without ever committing wholeheartedly to any one cause.

However, the unusually punctuated, brand-avoiding mis-spelling of their name tells a slightly different story. There’s something secretly deviant about them, a little more hidden beneath the surface than in the case of Dingus Khan, but there all the same. Listen to the words of the silly but subversively poignant ‘Latvian’ for instance. Ben worries that while he’s capable of translating the words “I love you” into a hundred different languages and printing them onto individual handkerchiefs, he may well ultimately send them to the wrong address. On the spectrum of subject matter this definitely tips the needle beyond merely original and into the red area marked “seriously eccentric”. Which, needless to say, is something to be grateful for.

When, on the other hand, they play a song which wears its complexities on its sleeve, like their new single ‘Weekend’, they go the other way. After they use the verses to relate the thoughts of two partners enjoying (or not) the same weekend away, they join in unison for a smile-raising chorus of “stuck like SuperGlu.”

At the end of the day it’s their talent for writing unforgettable songs like this that will see them sail through the qualifiers and into indie music’s playoffs with relative ease. The fact they do that with such energy and infectious fun can only help their cause further. Stick with them.