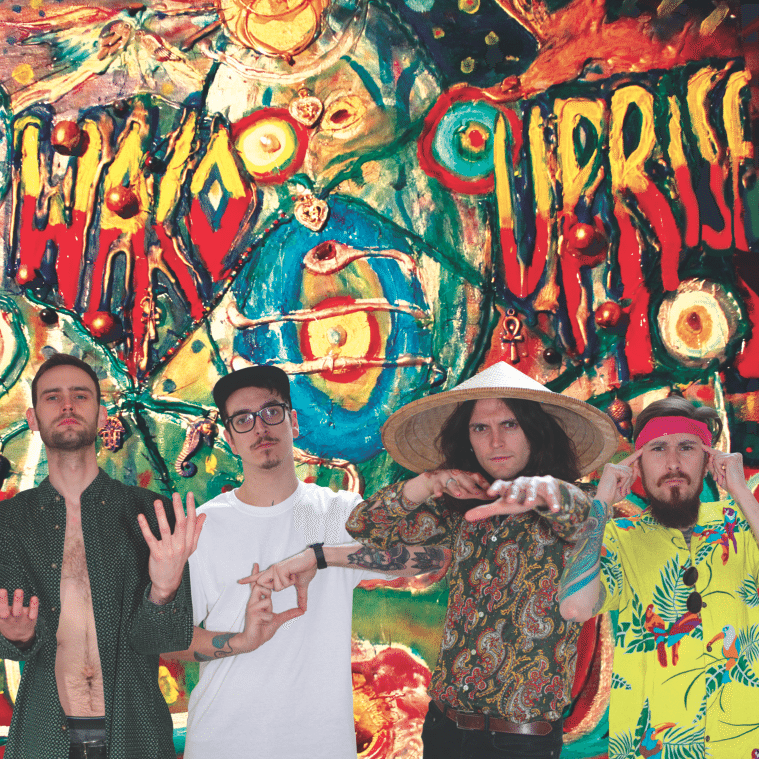 London four-piece WACO released their latest record on June 10th, an EP entitled Uprise, and it was with a cheeky smile that they threw it out into the world under the header of “cosmic punk”. Uprise, as the name suggests is true to the classic punk routes that it harks back to constantly with the title’s call to action. The fast and thrashy mood of the EP is consistently cutting pages out of Anti Flag’s and The Ramones’ books and plastering them in classic serial killer style onto a blank piece of paper – a message to the state, no doubt.

However, WACO aren’t just rehashing the same punk political agendas, they’ve got a more transcendent and human-centric vibe, and I suppose that’s where the term “cosmic” comes in. It’s like they tore those pages out and scribbled all over them in crayon, sucked blow-pen ink out of the nib and vomited it onto the black letters of their note. As such, the title Uprise works on two levels, both as call for a revolution of a political kind and of a intellectual one. It seems WACO intend people to enter a higher consciousness in both a social and psychological sense, and they ensure this by candidly addressing the listener as a friend would – with no pretence.

The opening track, ‘A Mighty Hope’ is the full throttle kick-into-gear that every EP needs. I’m imaging festival crowds, knees up, beer mixing with mud mixing with sweat. The track keeps bringing the energy up and up, building an incredible tension that is perfectly expelled upon the first drum hits of ‘SE17’, the latest single off Uprise. This track has all the sing-a-long charm of Jeff Rosenstock with the unmatchable fury that only British punk carries through.

Following track, ‘Rotten Tooth’, continues the Rosenstock vibe, but particularly shows the “cosmic” side of the band in full force when the playful guitar lead in the choruses tears through the group’s chanting vocals. This psychedelic string-play is carried forward into ‘Nancy Guntrip’, which although forms the slower and more thoughtful part of the record, ends with one of the most aggressive beat-down punk riffs I’ve heard in a long time. Uprise ends on a track called ‘Salem’, which heaves the listener to and fro with a loving force, and as the dust settles you’re left wondering what just happened.

WACO’s latest offering is a balls-to-the-wall party of punk-meets-psych, and there’s very little that I can fault about it in that sense. The EP’s consistent pace and mood does mean that the record passes in the blink of an eye, but there’s nothing wrong with that. So long as you’re left feeling like you’ve felt something, and connected with the band then what more could you ask for. I’m looking forward to hearing what the band can do with their next longer record, because I’m sure the genre of ‘cosmic-punk’ can go a long way in the right hands, and those might just be WACO’s if they can push their experimental side just a bit further.