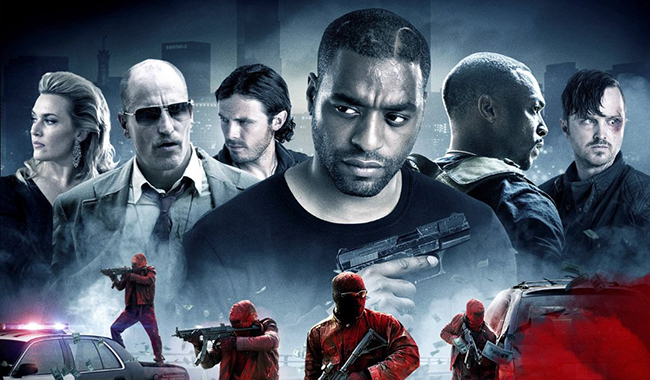 And it’s a heist movie of sorts? Sounds like a blast!

Of course the films selected above don’t even compare in the slightest to the roles each of those actors play here. In fact most of them are quite far from it –proving their popularity and abilities in modern cinema.

A gang of armed robbers are under the thumb of the Russian mob and after an opening heist and pushed into delivering another job. In order to do so the team (half of which are corrupt police officers) decide the best way to accommodate their needs is to create a “Triple 9” diversion (This being a call out for an office down which gains the attention of all police officers on the job).

The trick then is finding an officer they are willing to down so that they can conceivably continue their next heist. Of course there are complications along the way and a string of consequences for all actions taken which causes the unit to fall apart from the inside.

Casey Affleck is very good at doing low key, and always fits in with an assemble cast, but here he’s playing it so low key that it’s hard to register him amongst the rest. Chiwetel Ejiofor gets to pull on various strings with his character so that we can see him at as sympathetic, but also daring to show a very unsympathetic side to the character. More often than not in a movie about criminals (as protagonists) you don’t get to see this side.

But money goes to Anthony Mackie who really gets to deliver a powerful piece of character work unknown to anything he has done before. It’s also always good to see Clifton Collins Jr get meaty work to play with.

The film also looks great, but something isn’t quite gelling with the drama along the way to make it more of an engrossing venture.

Triple 9 then has a cast to die for, a familiar premise but still not quite enough guts or raw material to really stuck with you long after, therefore dropping it into the rent don’t buy category.