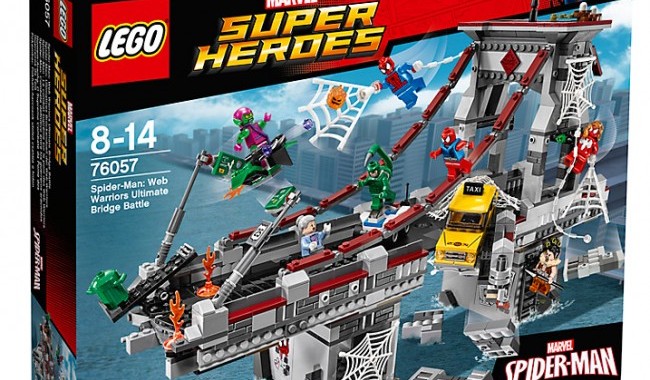 The Superhero Lego line up has always struggled from the usual lack of anything interesting to build. The Superhero and Super villain characters have always been the draw to these sets. The only really special set that comes to mind is the £269.99 SHIELD Helicarrier set (76042) which is beyond most casual Lego fans at least.

However, Lego seem to have finally got the line-up right and it has to be said, it has had by far the most impressive sets released this year, really eclipsing the usual hands down winner Star Wars. The crowning glory for the year is the Spider-Man Ultimate Bridge Battle set which got the Lego fans excited right from its announcement at London Toy Fair in January this year.

The set effectively consists of a broken off part of a suspension bridge, evocating the iconic Brooklyn Bridge, a classic yellow New York Taxi and 7 minifigures to do battle with. And while the bridge isn’t directly related to the Marvel universe in any way, using a thousand pieces on it really makes it seem substantial enough to finally give something large enough worth displaying with your Superheroes as well as giving an exciting playground for all sorts of play.

The minifigure line up gives us a whopping six brand new figures. The only one that is the same is the very much now classic Spider-Man himself. There’s nothing wrong with the standard iteration of the figure of course which is why he has stood the test of time, but I do find it a little odd that they didn’t keep the dual colour legs that were introduced last year in the Rhino and Sandman Super Villain Team-Up (76037) set. I did find the little extra colour a good addition to the figure, so it is a little shame to go back to the blue only legs.

The Spider-Woman figure sports the look of the Ultimate Spider-Man series where Jessica Drew is a clone of Peter Parker, has a blonde hair and a red suit with a white spider logo. The look unsurprisingly has been perfectly captured, but as you can expect from a character with so little detail, it does end up rather plain. Having her hair visible outside the otherwise fully covering mask is per her look in the comics but certainly looks odd on a minifigure. However, the hair does at least give the figure a unique look and therefore distracts from the plain uniform.

The Scarlet Spider is the original Ben Reilly version who was another clone of Peter Parker who for a time ended up becoming Spider Man as well. The original Scarlet Spider character tended to wear a red suit with a ripped sleeveless blue hoodie on top. Again the costume has been very well represented although in Lego form the blue hoodie does look a little too tidy due to the usual minifigure limitations. Scarlet Spider also gets a hood in its folded down position which I only remember seeing before on the Wyldstyle figure from the Lego Movie.

Aunt May is a rare appearance of a civilian in these Super Hero sets. I really think it would be nice if we would get a few more of these and I would have loved to get a Peter Parker figure in the set. Some of my favourite figures are these civilian alter-egos such as Tony Stark from the Iron Man Malibu Mansion set (76007) and the Clark Kent figure that was a collectors’ extra on The Lego Batman DVD. Aunt May herself could be an elderly figure from any City set aside from the flesh coloured face, but I do think these extra characters add greatly to the playability of sets as well.

When I first saw the Ultimate Bridge Battle set pictures, the first thing that I noticed was the Green Goblin figure, Spider-Man’s arch nemesis who in his normal early look has been completely missing from the Marvel Superheroes Lego sets. In 2014 we received the big fig Ultimate Green Goblin figure in the Spider-Helicopter Rescue (76016) set, but in his classic human sized form the only decent version has been the the Lego Juniors set from last year (10687) which had a pretty decent if not simplified version. The new Green Goblin figure is pretty much perfect as it goes. Printing on the figure is nice and detailed, including printed arms which are still pretty rare in Lego minifigures. He also has double sided head, dual coloured legs (green and pink) as per the previously mentioned one-off Spider-man as well as a plastic satchel for his pumpkin bombs.

The Scorpion has had many versions in the comics over the years and it’s not quite clear which one of these we are looking at in here. The interesting possibility here is that this is the Ultimate Marvel version where he is, you guessed it, another Peter Parker clone making it the fourth one in the set! In any case, the figure has a new scorpion tail mould that attaches to the figure via a neck bracket. The tail design is nice and detailed, though it does not offer any articulation which would have been a nice touch here. Otherwise the figure is all in green with some head and body printing which, while accurate to the source material, leaves the figure a bit too uniform in its overall appearance.

Finally we have Craven the Hunter, another of the real classic Spider-Man villains. The big game hunter is very much the opposite from the all green look of the Scorpion with his orange leopard print trousers, a Zebra pattern belt and an open, sleeveless vest with a lion head. To  top it off, he has a plastic moulded fur collar around his shoulders representing his traditional look with the lion’s mane on the vest. The look is very nice as well as accurate to his classic depiction and a great addition to the Marvel/Spider-Man Lego universe.

The build of the set includes the bridge itself, a little buggy belonging to Kraven and a yellow taxi. Aside from perhaps the buggy, everything is scaled down from a true minifigure size. The taxi is large enough only for the driver being only four studs wide, and the bridge itself would struggle even with two vehicles of that size passing each other on it. However, that is not to say that the bridge itself is not impressive. This is not a City set for cars and the size is certainly large enough for all the characters to do battle on. It is also worth clarifying that this is not a complete bridge. You would probably need two sets and a little extra length on top of that to have it looking like a real suspension bridge. Worse than that, there is no ramp up to the bridge at either end, which would certainly be a pretty hard feature to create convincingly at least with standard Lego pieces.

The initial build concentrates on the two foot pieces, which double up as Kraven’s hideout and a place where Spider-Man has at least changed costume. The latter is indicated by a nice detail of a camera hanging in spider web hinting at Peter Parker’s day time job as a photographer for the Daily Bugle. Kraven’s lair includes a weapon rack with a spear as well as a computer station showing Spider-Man’s coordinates. The outsides of the bridge feet also have some stickers adding Spider-Man references with wanted posters for Scorpion and Green Goblin, Daily Bugle front pages featuring Spider-Man and Kraven and some graffiti.

The road section is mainly made of smooth plates except for the section over  the above mentioned webbed Spider-Man area which contains a trap door that can be operated by a simple mechanism on the side. The bridge section also shows some nice detailing in its design. The broken end of the bridge nicely captures the beams and pipes that would make up the interior as well as the broken road surface where the break would have happened. There is also a play feature on the side of the bridge which opens so that the taxi can crash off the bridge as indicated by the tire tracks created by a sticker on the road surface. The best part of the design for this is that it is very well disguised and aside from the tire marks would be quite difficult to spot if you didn’t know about it. The road signs arching over the broken section of the bridge also look very nice and add to the believability of the bridge.

The tower/arch over the bridge again looks very well designed. The sides of the tower have removable walls that can again be triggered by a mechanism presumably depicting either blowing up the tower or perhaps battle damage from Green Goblins pumpkin bombs. As before though, the feature is perfectly hidden and therefore doesn’t ruin the look of the bridge in any way. The roof section again has some additional detail with a Green Goblin flag flying on the top as well as a bird’s nest with some eggs. The front and back of the tower feature plaques with the year 1962 in the style of the year of construction, but in this case clearly referring to the year Stan Lee first imagined his new teenage comic hero. The top also has a simple play feature which allows you to push one of the minifigures off the top to swing off the bridge with their web. Finally, the suspension cables look excellent with a simple construction made up of snap on hinges.

The vehicles also look descent. The taxi in particular looks very much like the classic boxy look of New York yellow cabs. The size reminds me of Lego sets from the 80’s when the standard size of a Lego car was very much a single person vehicle. So the taxi won’t work very well with your other modern Lego cars, but looks pretty nicely in scale with the bridge. The buggy is a very simple design with literally just fender pieces attached over wheels and some detail like radio, hand-cuffs and the handle-bar.

The Web Warriors Ultimate Bridge Battle is an impressive set. It really does the best it can with its thousand pieces making up a large play-set and still keeping the price below £90 which is almost unheard of for licensed sets like Marvel or Star Wars. Add to that the seven minifigures of which all but one are unique and you have a real treat of a Lego set in your hands. I have for long believed that play sets are the way to go for superhero sets as there just aren’t that many interesting vehicles that would be recognisable to the fans of the comics and films and I’m very happy to see Lego going this way at least with the larger sets this year.

While the set clearly is a play set, in this case it really shouldn’t detract anybody from owning it either. At this size and detail it certainly wouldn’t look out of place as a display set which makes this one of those rare sets that should work well for both markets. With really special minifigures like the Green Goblin included as well, I can’t think of any reason why not to recommend this set fully.