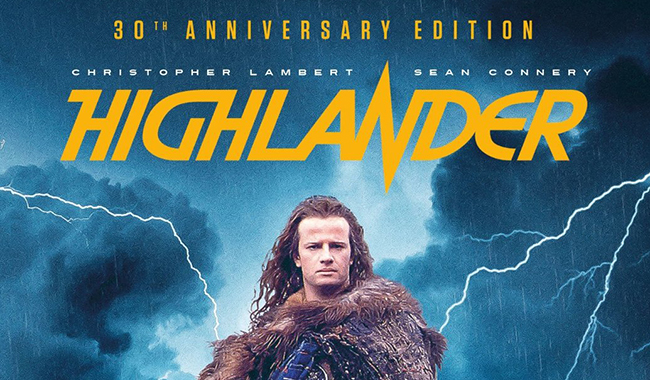 Highlander comes to Blu-ray again, this time to celebrate the 30th anniversary of the films release – but also to provide us with a 4K restoration of the film.

Highlander in its tenure spawned no less than 4 sequels, an animated show and a long run live action television series. Not to mention talk of a remake and (thanks to the films famous “There can be only one” line from the film) a heavy dose of irony and scorn.

The original remains intact as it is a true 80s classic. It launched Christopoher Lambert into the big time, Gave Sean Connery another quotable character, and gave Clancy Brown his most famous on screen villain to date. It remains Russell Mulcahy’s best film and also features a very memorable soundtrack by Queen – not to mention a decent score by 80’s action stalwart Michael Kamen. All of the above are at their best with this film.

But the big reason that people are looking to upgrade is perhaps the 4K restoration. Blu-ray buyers are not guaranteed a strong picture when given the 4K treatment as often it can depend on the source material used.

The Ghostbusters 4K is a prime example of how it can all seem like a waste of time and buyers money. The Highlander 4K suffers from some of the same issue (Namely a lot of noise on the screen). But when compared to the previous Blu-ray edition there is most definitely an improvement.

Source material, time and money are required when it comes to restoration. The Jaws blu-ray still reigns triumphant on being a near perfect picture. But we suspect under a huge studio, and coming from one of the world’s biggest directors and being one of the world’s best films that it was going to get more time, money and talent thrown at getting such a perfect picture. Highlander is much more mid-range and the T/M & T thrown at it reflects this.
This is a must buy for anyone who has yet to own the movie. We can’t relay enough how much of an 80’s staple of action fantasy and action cinema this is. Collectors will also want to grab this edition as it also has a couple of new extras. A new 30 minute interview with Christopher Lambert which is in pretty good.

There may have been one too many at this stage. But this first film has held its head high above the rest, and kept it on its shoulders as well.