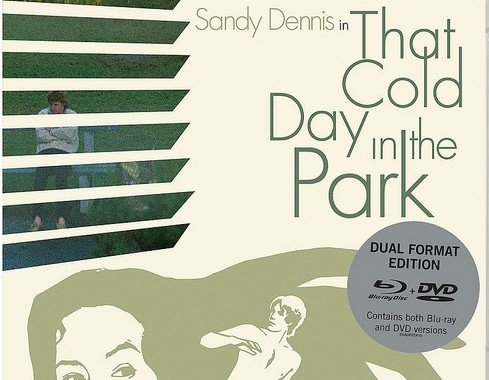 That Cold Day in the Park Blu-ray review

A recent release by Eureka! in their Masters of Cinema series is a relatively little known and dare I say smaller offering from cinema maestro Robert Altman. That Cold Day in the Park was a film made in 1969 and its style is very much of its age. Part screwey thriller and part strange love story the film deals with a weird stranger in the house. Made in 1969, the year before Altman made his ground breaking M*A*S*H. The film follows the story of a lonely but fairly well off spinster living in Vancouver (played by Altman regular Sandy Dennis) who observes a strange young man sat for hours on his own on a park bench. After she has finished her cocktail party she invites this handsome young man in (played by Michael Burns). She is soon led to believe that the handsome young man is a simple mute and invites him to stay. In time she begins showing signs of being obsessed by him. But at about the two thirds point in the movie the young man has left the confines of the comfortable home and goes to see his friends and girlfriend when the reveal is that he is not simple or dim witted at all but there is a con at the centre of the film and this lonely and now obsessed young spinster is being taken advantage of. Indeed on more than one occasion the film twists and turns and changes direction including the shocking ending involving a prostitute (played by Luana Anders).

Based off a novel by Peter Miles, That Cold Day in the Park was panned by critics, unfairly it has to be said on its release.  Although by far from being Altman’s best film, it is an interesting small thriller, even quirky led by an understated performance by Dennis. Shot by one of the most interesting and familiar cinematographers of the late 1960s and 70s, Laszlo Kovacs (he also shot Easy Rider in the same year) the film includes many trademarks of both Altman and Kovacs’ including the long distance shots and an interesting score by Johnny Mandel (who interestingly wrote the soundtrack to M*A*S*H). As a psychological thriller it has some precedents in Wait Until Dark (1967) which had starred Audrey Hepburn as a blind woman being terrorized in her own apartment by an intruder. But That Cold Day in the Park is a home invasion film unlike Wait Until Dark or even Michael Haneke’s Funny Games (1997 and 2007) in that the unseen presence of the film is not a violent intruder but an invited guest.

This is the first time that the film has appeared in the UK in either Blu-ray or DVD, or for that matter even video. However, other than a trailer there is bare bones extras on the disc which is a shame as Youtube has footage of Altman and Dennis during the filming but definitely one for the collection.