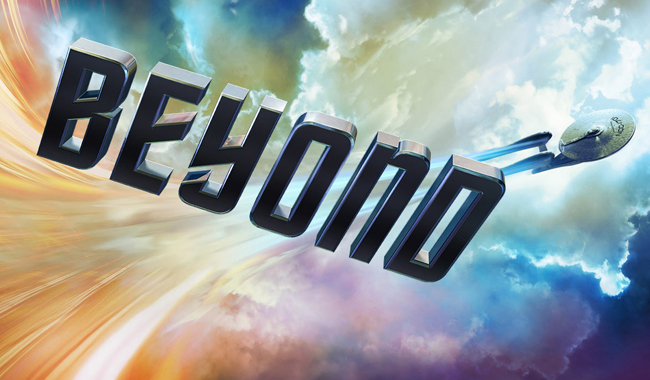 Star Trek hits its 50th anniversary this year and thankfully they have a good Star trek film with which to celebrate.

JJ Abrams has left the Director’s chair, although clearly never letting go of any franchise he gets his claws into, he’s around in the producers capacity. But there has also been a change-up of writers as well including Simon Pegg (on screen as Scotty) who we have to say has given a more loving approach to the series.  Star Trek Beyond isn’t going to win any awards for writing, but it does strip things back a bit allowing there to be more of a focussed story with plenty of hidden information throughout to allow for a more pleasing pay off, instead of any horrifically contrived or convoluted machinations at work. The focus is largely on characters this time and thankfully so!

The story this time round finds the crew 3 years into their 5 year mission of discovery, and a few of the crew (including their captain) are thinking about the course their careers are on.  Kirk finds himself past the age his father ever reached and also up for a vice-admiral position (which is a bit of stretch considering he is still on his first 5 year mission and at the rank of Captain!). Spock receives news that puts him on a possible life changing course as well – and both have yet to alert the other.

But the crew are sent off on a rescue mission to aid an alien species only to come under a severe attack from an unknown enemy. Before long the crew are separated on a desolate planet and for all intents and purposes marooned, having to fend their way back to each other.

This new timeline had two films that focussed on a new trio of Kirk, Spock and Uhura at the for, and this film has decided to go back towards what the fans were more familiar with – That being Kirk, Spock and McCoy. And we have to say that Karl urban puts in his most aggressive “Bones” interpretation this time round and it really makes up for the miss-use of him in previous films.  McCoy is key to the friendship and his time spent alone with Spock in this film really adds weight to that. Scotty also gets his own little mission away that at times you think might teeter on the edge of a romance with an alien girl, but thankfully never feels the need to bend that far.

The film is in no short supply of action. And the blend of drama and comedy is more evenly balanced this time round. The film also offers a much more balanced story that allows some of the supporting characters to shine more than in previous films which makes the film much more engaging. Splitting the characters up and letting them interact in ways we have not seen before really shows you how strong this group can be. If anything it’s a practice worth pursuing in future films.

The film does have its own dark cloud despite the celebration. Namely in the fact that Leonard Nimoy, and more recently the young Anton Yelchin are no longer with us. Thankfully Yelchin is given his biggest role yet in the franchise, and Nimoy’s older Spock is acknowledged.

Justin Lin does at times let the action get away from itself with some of the more frantic scenes being hard to follow through the fast cutting. It is also a much darker shot film as well (and this was a 2D screening! So 3D fans may want to be mindful of this). The upside is that the Apple Store look of the enterprise bridge is less glaring!

Beyond is not likely to do for Star trek which Skyfall did for James Bond, but it should at the very least do some damage repair from the effects of Into Darkness. You will come away actually looking forward to the next film.

Fingers then are crossed that their next venture doesn’t succumb to the hit/miss ration the films sometimes often follow. Some brave new ideas are needed, but the focus needs to remain on the gallant crew.