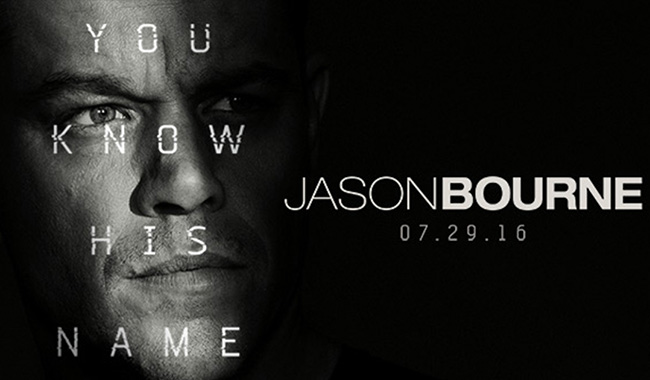 It’s been close to a decade since we last saw Matt Damon in the role. He insisted (and probably quite rightly) that he wasn’t going to come back without director Paul Greengrass. And we do get both back, and both are wanting to up their game.

Jason Bourne finds the forgetful spy again found in hiding, and again pulled back against his will to face the people who are largely responsible for the life he ended up with.  Tommy Lee Jones steps in as the big bad big wig this time with the solitary agenda of ending all things Bourne. Vincent Cassel puts in an impressive turn as the assassin (sorry “Asset”) sent after him (literally matching Damon in terms of physicality. We did peg Cassel as a great idea for a Bond villain, but this will do!). Alicia Vikander has a harder role as a young CIA operative keen to work her way up the ladder adds an interesting dimension to proceedings, complicating the line between what we perceive as a good or bad guy – which makes a welcome tone when you consider how very vanilla Jones and Cassel’s characters are. Julia Stiles returns once again as Nicky Parsons, and a Riz Ahmed puts in a memorable turn as a tech wunderkind who gets to show that he is more than capable of meeting Tommy Lee Jones on screen and bringing his A game.

The story this time is a little more personal down to the fact that we now get a bit of family history relating to how Jason Bourne became Jason Bourne. But aside from that it really does feel a bit “business as usual.” Jason Bourne is back, but so what?

That may seem a bit ungrateful considering the physical work Damon has put himself through, not to mention some truly monumental set piece work established and worked through by Greengrass. An early sequence in Athens establishes the fact that Greengrass knows how to manage space, wide spaces with large chaotic crowds (a full blown riot in this case). This is not easy work for film-makers, but you can’t deny (having been familiar with previous films in the series) that you as an audience member know exactly how this set piece is going to end. Anticipation for action is one thing, but predicting the outcome barely after it has got started is another and does impede the enjoyment of what is otherwise a very impressive sequence in the film. If the film is to score big points from less attentive critics it will be due t scenes like this lowing them out of their seats.

The film has trouble keeping up with how technically impressive it’s opening act is, and it isn’t until the closing act set in Vegas that you see it really go for it again – and oh boy does Greengrass go for it in the last act!

Taken on its own terms: It’s impressive filmmaking. But this is what hampers Jason Bourne from start to end. We have been here before. Maybe on a lower budget, but we are at the stage in this franchise now where you can tick the familiarity boxes of characters, “Asset” assassins, Bourne memory farts, Bourne using all manner of utensils as weapons, car chases and that damn Moby song at the end that people “used” to like.

This does push the story forward for Bourne ever so slightly, but by the end you’ll wonder if so much has actually changed at all. The problem here is that should another film happen it could literally open in much the same fashion of previous films and then we find ourselves back at square one with a rotating cast of villains in the prime seats with only the agenda of removing Bourne off the face of the Earth. Next time round it would be nice instead of seeing Bourne in hiding from the planet to see him come back to it.