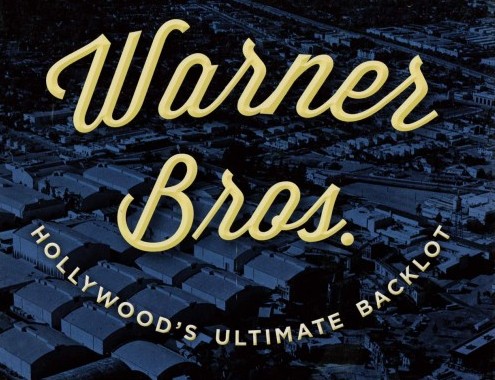 Steven Bingen’s large coffee table book, crammed with interesting then and now photos of the studio could only have been written by someone who knew the Warner Brothers Studios well. Bingen’s background comes from many different angles: he is a film historian, a B movie screenwriter and a long time archivist at Warners. He brings all this history to the fore in the book with some clear personal recollections, including a few “couldn’t recalls”. He has also written another similar book about MGM’s backlot.

Of course Warner Brothers is one of what used to be termed the majors, but during the ‘golden days’ of the Hollywood studio system it lagged behind other big studios such as MGM and Paramount. Yet during this golden period, especially after the Wall Street Crash and during the Great Depression it was the studio that made the ‘social problem’ film and was not shy at being risqué during the Pre-Code era when sex and violence was more permissible. But asides from the early days this book is less concerned with the history of the studio and more concerned with the dates of when the studios, the backlots and streets were built. The early chapters of the book do look at the early history and how Jewish émigré brothers Harry, Albert, Jack and Sam Warner created the studio that did not have a particular style until the late 1920s. The youngest of the brothers, Jack Warner is probably the brother most synonymous with the studio and the one lasted the longest. It was Sam Warner though who had the biggest impact in these pioneering days. He was driven to bringing sound systems and adopting the different sound processes to their cinemas. A music track was created for Don Juan in 1926, meaning no orchestra before eventually championing the part ‘talkie’ The Jazz Singer the following year, famous as the first talking picture. Sadly Sam died days before the film was released due to complications from a tooth infection.

Throughout the 1930s Warner Brother Studios made social problem films, films that had strong Democrat leanings and dealt with and delivered the great gangster films, back stage musicals like the magical 42nd Street (1932) and other Busby Berkeley films as well as later some great film noirs in the 1940s. Actors such as James Cagney, Bette Davis, Errol Flynn and Humphrey Bogart were the great actors contracted to the studio. Over the following years the studio continued to grow and overcome the financial crises that faced all of the studios from the rise of television (which it also had huge successes with) and the studio collapses and takeovers of the late 1960s and early 1970s. Even today the opening credits and studio flash has as its logo in a honey golden glow pan over the famous roofs of the Warner Studios before the signature shield tells us that this is a Warner Brothers picture.

The book opens with a potted history of the early days, the history of the area where the studios were built and the development of sound before delivering a chapter by chapter tour of the entire Warner Brothers complex starting with the Front Lot tour of the large sound stages and going through to the workshops, the streets and even the iconic water tower and its different transformation with logo changes. Also detailed are the numerous fires that ripped through Warner Brothers over the years destroying many of the soundstages and sets. Within each chapter details of each individual soundstage and building is given a few paragraphs outlining details, when it was built and what it was used for etc. While there is no great detail into what individual films were made where, especially on the street sets (although it does give over space to the large build for Stage 21 that was built for the ship sets for The Sea Hawk (1941) starring Errol Flynn) it does give an indication, or at least a broad history of the expansion of Warner Brothers over the years.

In many ways the history of the studios are a microcosm of America’s lack of respect for her own history as sets, building, streets are knocked down with the result of dismissing its past for progress, new builds and the growing development of the studio. Good examples of this are the nature in which the street sets are destroyed; how the Western Street is now a parking lot given that westerns are rarely made these days and when they are they are generally shot on location or how each street, New York Street, French Street, Midwestern Street, New Orleans Street or Tenement Street are constantly changing with each film allowing the studio greater control in what they can do. The final shots to Mel Brooks’ Blazing Saddles (1974), mentioned in the book, in which a western brawl is followed by a crane shot in which the camera pans back to show that the film is actually on a set that in the end shows the entire Warner Brothers studio. This destruction of the ‘magic’ is highlighted further in the book as it explains the fountain from the opening credits of the hit TV comedy ‘Friends’ that is actually a fountain in the south west corner of the Warner enclosure or the fake front of the house in ‘The Waltons’ or indeed the entirety of these shows and others including ‘Wonder Woman’ were actually filmed almost exclusively in LA at Warner Brothers Studios.

This is an interesting read which, as well as being a coffee table book is also a detailed breakdown of the entire Warner Brothers lot. There is a helpful appendix detailing chronologically where each film and television show was shot. While it does expose much of the magic of the films it also highlights to show the clever craft and illusion of filmmaking. Crammed with interesting historical as well as present day photographs and productions stills such as Bette Davis relaxing during a break in shooting for A Double Life (1946) this is for many film buffs a must have book.