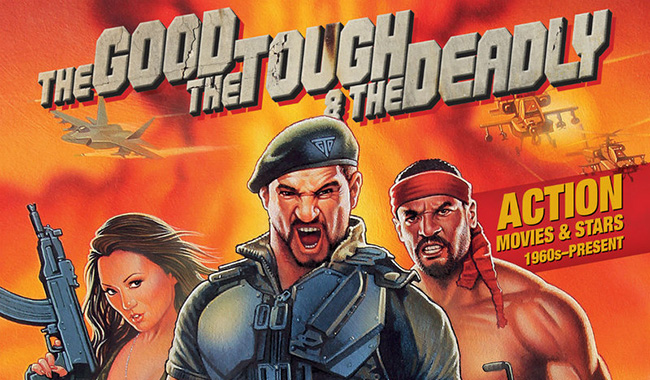 The Good, The Tough & The Deadly Review

David J Moore impressed us with his World Gone Wild book – An impressive tome listing and reviewing all of the post-apocalyptic set movies the author could find.  Everything from big budget to real low-rent material.

Moore is back now with an ensemble team of writers to now cover the action genre. Well, a large portion of it anyway. A whole host of A-Z list actors have been chosen, and then select films from their filmography have been covered here. Each entry comes with basic information about the film before the chosen writer delivers their review. There are also plenty of pictures and behind the scenes photographs to break up the text along the way.

Moore does his best to introduce the volume and explains what choices have been made for the book. It largely is focussing on the men and women of action who are thought of as action people (usually who came up through sports or stunt work). But once you are in you will start to question the logic in some of the thinking when it comes to what was included and what was left out. It makes sense that the Blade movies are included; but worrisome that the likes of Batman and Robin are also included.  And it isn’t like there is an open rule for comic Book Movies (which we hope is Moore’s subject for a new book in the future!). The Marvel movies for example don’t really appear… but their shoddy previous versions do (Captain America 1979 version). Batman & Robin seems to appear because of Arnold Schwarzenegger’s top billing; as the rest of that series do not appear. The Cannonball Run movies also appear which seem a bit off topic, then again Hal Needam (the director) is a big stunt guy.

The book also only goes so far with the direct to video material and a big audience for the book are people who like their Jalal Merhi, Matthias Hues, Bolo Yeung cheapies! Then why is it we get a review of Cyborg 1 and 2 but not Cyborg 3 for completion. And also Lethal weapon 1-3 are missing but we get Lethal Weapon 4 (Because only of Jet Li?). Moore claims that the likes of Mel Gibson and Bruce Willis are not action stars in the introduction; but a book going by this titles and claiming to be about “Action” might want to hang its head in shame for not including Lethal Weapon or Die Hard?

Predator and Predators are covered but not Predator 2? Going by Moore’s rules – ok so Schwarzenegger is in the first one but Danny Glover headed up the second so he doesn’t include that because Glover is not an Action Star (Despite also headlining the Lethal Weapon series). But just who is it that Moore has his eye on in Predators?  Surely not Adrian Brody? And then slam bang in the middle of all is CGI-sci-fi fest Mars Attacks and zombie slow-a-thon Maggie? So there is clearly a little bit of inconsistency when it comes to what the rules were left open to.

Questions like this are surely to be raised by enthusiastic readers of the action genre. A little more clarity on the defined subject matter, or even just a last round editorial cull of films included/not included might have given this a sharper focus.

Anyone who reads Moore’s impressive World Gone Wild book will be familiar with the “fun” rating system used (Essentially a 1-5 scale) in the book. It is absent here. This may be down to the fact that Moore isn’t doing all of the reviewing alone and has many other contributors, and not all contributors might be used to a rating system.  This may irk some, but at least Moore is confident about letting the words do the talking about a film being worthy or not. Having a broader range of writers also brings in a variety of opinions, and at least more knowledgeable and lovingly wrote reviews about subjects that each writer is more accustomed to. That said, the book could do with a better proof read unless of course Avenging Force was released in 2986!

Quibbles aside this is still an impressive attempt to deliver a tomb full of love and devotion to not just a genre, but the many sub-genres within it. The lower budget material in particular has a bright light shone upon it and Moore and co are to be lauded for making the effort to give some modern day exposure to these talented artists. Fans of that by-gone era can relive that past here, as well as catch up with some of the stars from it in the interviews. It is also likely to help perk the interest in new younger fans out there who are eager to seek out the material on disc or online. Pulling together this 550 page volume certainly must have taken time.

The book has plenty of interviews and we are thrilled that it isn’t A-listers we are wasting time with here. Instead Moore has taken the care to bring out some real gems of the genre including Carl Weathers, Michael Dudikoff, Billy Blanks, Cynthia Rotherock. Zoe Bell, Scott Adkins, Marc Dacascos, Jeff Speakman and Al Leong to name literally but a few covered. Anyone looking for bigger names can seek comfort in the likes of Wesley Snipes, Dolph Lundgren and Tony Jaa. But it isn’t just actors; some known crew in the form of Mark Goldblatt, Sheldon Lettich and John Hyams are also covered.

After the A-Z review section you get a section on the actors listing the films that were covered in the book. So if you are looking for a particular Star to read up on it helps to have this as a guide for knowing what to find inside.

This book is for the action aficionado. As above, each fan will find something missing. There always is something missing if you go looking for it though. But each fan should still come away rating the book highly and recommending that solid action fans get hold of it. It will not only educate you on a lot of films you may have yet to see, but take you down that sweet paradise called memory lane with people a team of writers and interviewees who themselves have lived and loved it.