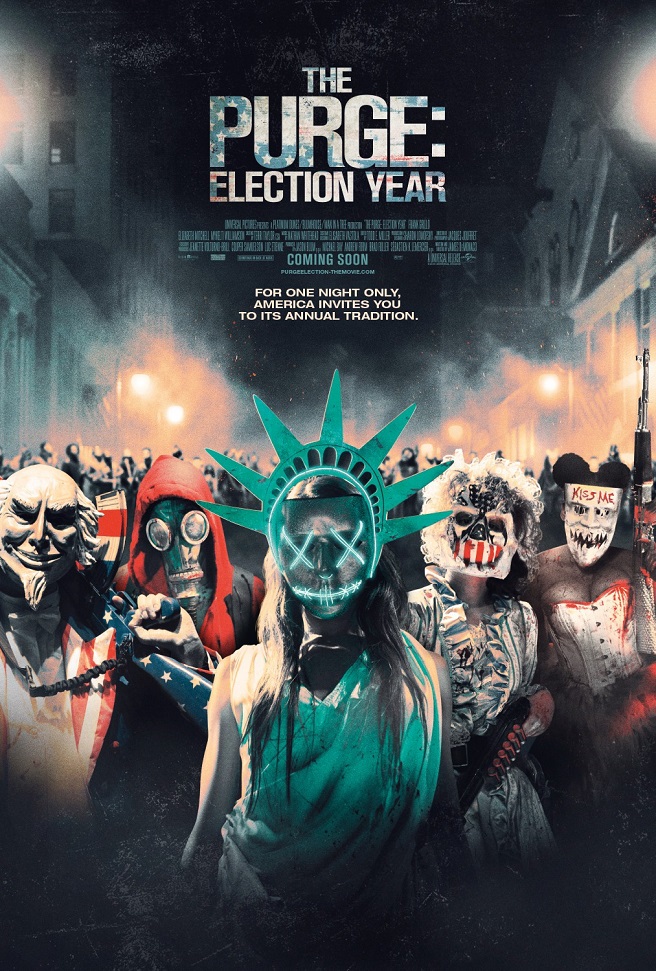 The third entry into The Purge series sees the return of Frank Grillo as Leo Barnes, one of the only characters to make the transition from one film to the next. But The Purge: Election Year isn’t about him, but something grander, and much more important; the devastation and chaos that this new law has thrust on to the world, and the need to stop it.

Enter Elizabeth Mitchell as Senator Charlie Roan, an independant candidate in the upcoming US Presidential Election. This dystopian future is one which she means to quell, with the main objective and nomination tactic to put a stop to the Purge, once and for all. But it is this which has made her a target, and so on this Purge night, as attempts are made on her life, Agent Leo Barnes is the man destined to protect her.

There are subplots and side stories within this, but these do only detract from the main plot of Senator Roan’s arc, the obvious strong point of the film. If James DeMonaco’s film had focused on the snatch, grab and extraction mission which follows, this would have been a stronger motion picture outright.

And it is safe to say that these are the more powerful moments of the film; the opening attempt on her life, in her own safe house, is one which brings the action to the fore front straight away. We meet the big bad, working under those who advocate the Purge. We see secret service agents get murdered, and they are not the only ones over the course of this film.

Indeed, the action rarely lets up. Once the annual Purge comes into affect, we swiftly move from set piece to set piece, either following Barnes and Roan, or the supporting characters who get caught in her story; these are Joe Dickson and employee Marcus, who work in a local deli, and Laney Rucker, who patrols the Purge, aiding those who need help during the 12 hour emergency service silence.

These stories only really feel important once the Senator is involved. In the previous Purge film, we were right in the centre of the danger. Here, Joe and Marcos seem to draw the danger towards them, and then don’t act on it, don’t do what is needed to truly save themselves.

We also meet up with activist Bishop, played by Edwin Hodge, who is hell bent on seeing the end of those who Purge and the New Founding Fathers, a part seen similarly in The Purge: Anarchy, it’s predecessor. The New Founding Fathers are very much the agenda here, where they were always in the background before. Here, we meet members of the society and their devilish ways.

A group of older, well made men, their obvious fortunes are not enough to convince us of the psychotic impact they can have on the United States. That said, there are enough scares and ounces of tension in Election Year to keep you entertained, as we learn more and more ways to scare and torture your neighbours, given the opportunity.

While not necessarily on par with our previous Purge encounters, Election Year does a job and does it well. You get what you expect to take out of it, which is more than you usually get from a horror/thriller into it’s third chapter.

The Purge: Election Year is out in the UK on the 26th of August