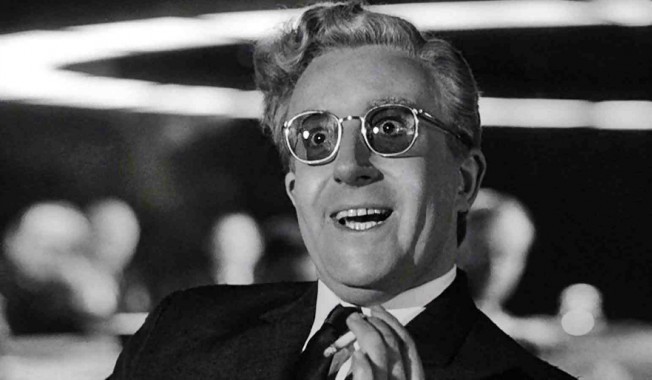 Dr. Strangelove or: How I Learned to Stop Worrying and Love the Bomb Blu-ray review

At the beginning of August Republican Presidential hopeful Donald J. Trump asked a foreign policy adviser that if the US has nuclear weapons “Why can’t we use them?” Comments like this only highlight how relevant the 1963 film Dr Strangelove still is today. The film was made at the height of the Cold War when President John F. Kennedy was in office and when an at least stable President was in power, in between the Cuban Missile Crisis and the assassination of Kennedy. 1962-63 the prospect of nuclear war and man’s stupidity at launching a nuclear weapon was at its hottest. This is not to say we are in a more stable world today, far from it, but even with East/West antagonism returning there is little to say that we will not be returning to this insanity again.

Part of the brilliance of Dr. Strangelove or to give its full title, Dr. Strangelove or: How I Learned to Stop Worrying and Love the Bomb is in the subtlety of its satirical black comedy, making it the best film using this subject matter, most famously played out by President Muffley stopping a fight between General Turgidson and the Russian Ambassador: “Gentlemen, you can’t fight in here! This is the War Room!” During this period there was a whole sub-genre films about the effects or the threat of nuclear war beginning with On the Beach (1959) and leading to the post apocalyptic survival Panic in Year Zero (1962) and the more political films Fail Safe, Seven Days in May (both 1964) and The Bedford Incident (1965) and the latter banned BBC documentary about the after effects of a nuclear strike, The War Game (1965). But none had the satirical bite of Dr. Strangelove.
The film opens with B-52 bombers flying on their regular patrols outside of Soviet air space. Meanwhile at a Strategic Air Command air base, Brigadier Jack D. Ripper (Sterling Hayden) has a mental breakdown and sends a code ordering patrolling B-52s to instigate ‘Wing Attack Plan R2’, instructing the bombers to drop their nuclear ordnance on the Soviet Union. Meanwhile, Ripper has instructed his British executive officer, Group Captain Mandrake (played by Peter Sellers, in one of his three roles in the film) to put the base on readiness for a Soviet attack. Mandrake is aware of what Ripper has done and tries to talk him down to no avail. In the Pentagon War Room a special session has been called in which General ‘Buck’ Turgidson (George C. Scott) briefs President Muffley (Sellers) of what has occurred. While Muffley tries to do what he can to stop events he finds that Turgidson can actually see that this preemptive strike could work to the US advantage (Muffley: “I will not go down in history as the biggest mass murderer since Adolf Hilter!” Turgidson: “Perhaps it might be better, Mr. President, if you became more concerned with the American people than with your image in history books!”). Muffley orders an attack on Ripper’s base, calls in the Russian Ambassador (Peter Bull) and makes a call to Soviet Premier Kissoff, as well as calling in nuclear scientist and ex-Nazi scientist, Dr. Strangelove (Sellers again).
Directed by the incomparable Stanley Kubrick he again shows some great nerve and inventiveness as a filmmaker. The unforgettable set of the War Room was designed by Ken Adam as a large chiaroscuro bunker space with a circular overlit table. Adam was also the regular designer of the James Bond films and this particular set not too dissimilar to Goldfinger’s lair. Sellers is another very key element to the film as he plays three roles: President Muffley, Group Captain Mandrake and Dr. Strangelove himself. Of course Sellers would play multi-role characters in many films but he has often said, including on some of the extras here that Dr. Strangelove was his favourite film. Kubrick allowed Sellers free reign to ad-lib many of his lines; indeed in some scenes you can detect others around him to be on the verging of tittering. Strangelove and Scott’s character are over the top, something that Scott openly felt uncomfortable about as the war mongering Commie hating Turgidson, but his bombast works well.
Yes, its apocalyptic but its also very funny and succeeds in what it sets out to do. So influential was the film that it led to the USA looking at its systems of Fail Safe and alter them accordingly. It is hard for us today to appreciate how close the threat of the mushroom cloud and nuclear war was in 1962-63 but if the films still sends a powerful satirical message today, imagine its effect then. The Criterion release is, as one would expect with this label filled with many extras focusing on the film, Kubrick and Sellers in equal measure and to date is the best packaging of the film released in the UK. For those who have not seen it is worth watching, especially given the mis-guided statements of someone like Donald Trump who could soon potentially have his fingers hovering over the launch button as a warning to those in power.
Chris Hick
Share
Tweet
Pin
0 Shares