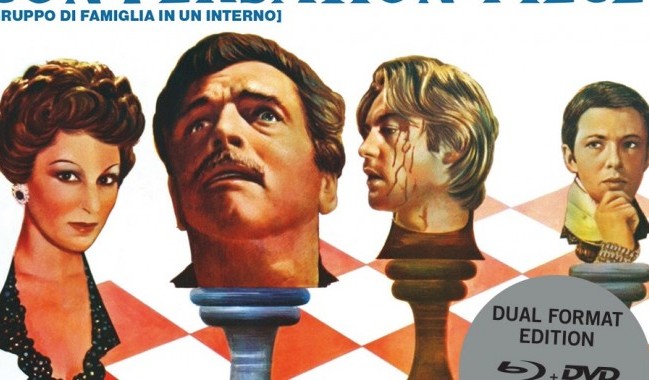 Luchino Visconti was always a very literal director. Take his little seen adaptation of Albert Camus’ existential novel, ‘The Stranger’ (released in Italy as Lo Straniero in 1967) in which Visconti was at pains to keep faithful to Camus and the same again in (the more often seen) Death in Venice (1971), adapted from Thomas Mann’s novella. Although Conversation Piece (1974) was not based off a novel or play its literary style as either a book or a play is apparent in the manner in which the director takes control of the script, the actors and the mise en scene. Visconti is a true master of the cinema and this late piece, while not the greatest of his films by any stretch of the imagination it does demonstrate much of his style. Visconti started his career very much as a neo-realist and even made a couple of propaganda films for Mussolini during the war, but nothing in these films hints at any of his later style as a future maestro of Italian cinema. Not until the late 1950s which culminated with the brilliant Rocco and His Brothers (1960) (also available through Eureka! in their Masters of Cinema series) did Visconti become labelled as an art house filmmaker. Conversation Piece was in fact his penultimate film, the last being the brilliant and underrated period piece, L’innocente (1976) and also re-unites Visconti with Hollywood actor Burt Lancaster. Lancaster had previously starred in Visconti’s epic about a Sicilian family, The Leopard (Il Gattopardo) in 1963. In this period, both abroad and in Hollywood Lancaster was proving himself to be an actor of great emotional intelligence and that is clearly evident in this later film for Lancaster.

The film is set entirely within the decayed elegance of Lancaster’s crumbling central Rome apartment. He is a retired American professor living alone surrounded by his books and a collector of 18th century paintings (conversation pieces). He has lived secluded in his apartment for years when his peace is interrupted by a rude middle-aged marchesa (Silvana Mangnano) demanding that he lease out the apartment upstairs. When he finally acquiesces she comes in tow with her arrogant young German lover (Helmut Berger), her selfish daughter (Claudia Marsani) and her boyfriend (Stefano Patrizi) and between them they consistently disturb his life with their troubles, machinations and neuroses. All the while the professor maintains his dignity throughout.
It is clear that Visconti is identifying himself with Lancaster as the appreciator of fine art and culture while the aristocratic family display their entitled behaviour, vulgarity and poor manners. Visconti often portrayed the bourgeoisie and the conflicts with those who are well mannered and educated. This is evident with Aschenbach’s conflict with himself in Death in Venice or the decayed similar surroundings to Conversation Piece in Sandra (or Vaghe Stelle dell’Orsa in the original Italian title) (1964), the bourgeois industrial family in The Damned (1969) and the decadent 19th century Bavarian King Ludwig II in Ludwig (1973) and this film offers a similar conflict with Lancaster acting perfectly in the role of the professor pitted against the marchesa and her people. Lancaster and Visconti seemed to understand each other and the American came into his own under the maestro’s direction. However, the making of the film was a struggle for Visconti who had recently suffered a stroke while watching TV in 1972 that left him wheelchair bound. This may explain the whole artifice of the film. The look of the film appears very much as a play and the visible exteriors outside of the building’s windows look very much like photo backdrops (look carefully and you can actually see shadows of the performers on the backdrop); this is not helped by the clarity of the Blu-ray making the artifice look all the more fake. Mangnano looks as elegant and well cast as ever and Visconti’s one time lover Berger once again fills the shoes of a young playboy well.
While the film has been available in the past, the extras on the disc, as is typical with Eureka! are complete and superb. There are both Italian and English soundtracks available and for once I would argue the film is better seen in English, allowing for both Lancaster and Berger’s performances to shine through. As well as an oral essay by Italian critic and screenwriter Alessandro Bencivenni there is an extensive documentary on Visconti and the making off this film with comments by Patrizi and Berger as well as other members of the crew who recall the making of the film and working with Visconti.
Chris Hick
Share
Tweet
Pin
0 Shares