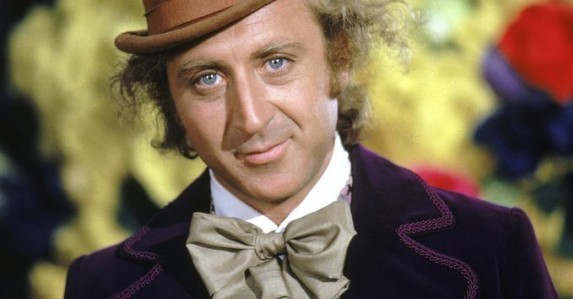 Sadly another great name has passed away. As reported on Monday 29th August Gene Wilder died aged 83 following illness and having suffered Alzheimer’s Disease for several years. His popularity had spanned generations with even younger generations citing the 1971 Willy Wonka and the Chocolate Factory as a favourite. Personally speaking, this film was not one of my favourites, but is still preferable over Tim Burton’s lavish overly candy coloured 2005 version. Not only is the 1971 film a firm family favourite but Wilder’s image as Willy Wonka is an enduringly popular meme image that at some point or other has appeared on most people’s Facebook news feed as a sarcastic comment. But Wilder will also be remembered for the films he did with Mel Brooks and Richard Pryor.

Gene Wilder was born as Jerome Silberman in Milwaukee in 1933. In 1955, aged 22 Wilder came over to Britain to begin at the Old Vic Bristol where he stayed for a few years before being drawn back to New York to study his craft further and take on some classical performances. In the early 1960s he met with Mel Brooks and this fateful meeting would change the lives of both men forever after he appeared in a Broadway show with Brooks’s then girlfriend and future wife Anne Bancroft. It was in 1967 that Brooks, Wilder and Zero Mostel teamed up for the zany Broadway comedy with songs, ‘The Producers’. The following year the same team would re-create the stage hit as a full length feature film with Wilder and Mostel repeating their roles as Leopold Bloom and Mostel as his partner Max Bialystock. Much of the play and the characters within, including Wilder’s Bloom came to define some of Wilder’s best performances, a calm mannered attitude that leads to explosive hysteria. He made a career of this, and a very successful one it was too using this steep gear shifts in temperament. Wilder would go on to appear in several of Brooks’ other films including Blazing Saddles, Young Frankenstein (both 1974) and The Adventures of Sherlock Holmes Smarter Brother (1975).
Many of Wilder’s other performances would follow in a similar style such as in the oft forgotten and underrated French Revolution set comedy Start the Revolution Without Me (1969) with Donald Sutherland, but another period of his career would be re-booted when he starred with Richard Pryor in the comedy disaster movie thriller Silver Streak (1976) where Pryor and Wilder made a superb comedy team in three films, bringing out some of the best of each other in a series of films of varying quality in Stir Crazy (1981) and See No Evil, Hear No Evil (1989). Perhaps the best scene in Silver Streak has Pryor ‘black facing’ Wilder to evade the police.
For me one of the key performances, asides from his his outing as Dr. Franken-steen in the brilliant Young Frankenstein is as the doctor in Woody Allen’s hit and miss Everything You Always Wanted to Know About Sex *But Were Afraid to Ask (1973). In this vignette from the film an Armenian shepard arrives in his surgery where the shepard relates how he has fallen in love with one of his sheep. Wilder arranges for a meeting with the shepard and the sheep and finds himself with the same feelings for the animal. Wilder’s expressions in this film are priceless and clearly demonstrate his talent as a comic actor. Yet Young Frankenstein must be most assuredly Wilder’s best role in his best film, that cleverly draws on the original Universal Frankenstein films and is done in Brooks’s most irreverent style. However, it will most likely be as Willy Wonka, the quirky and eccentric genius that he will probably be best know and maybe this is a most appropriate memory.
Chris Hick
Share
Tweet
Pin
0 Shares