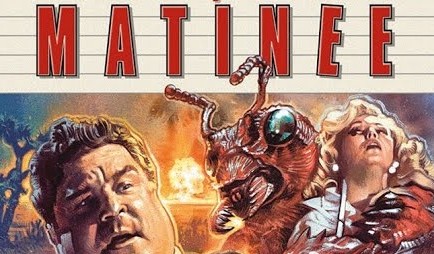 The latest release from Arrow Video, Matinee encompasses a lot of what the label is about, but is a relatively mainstream film for the label but deals with the subject of B movies. Directed by 80s/90s cult favourite Joe Dante, the director clearly draws on many of his own memories and nostalgia as a passionate cinemagoer in the 1960s. Much of the film is through the eyes of teenage high school kids and in particular through the eyes of Gene Loomis (Simon Fenton). Gene and his friends (and younger brother) love nothing better than taking a visit to the local cinema for their Saturday matinee creature feature. The time and location of the film is very specific. It is the sunny climbs of Key West, Florida and the time is October 1962 at the time of the Cuban Missile Crisis when the world was the closest it had ever been to nuclear war (Key West is only approximately 90 miles from the epicentre of where events were unfolding in Cuba). The boys live near an army base and some of their fathers are either in the army or the navy. Despite their palpable fear of the bomb the teenagers find escapism in the Saturday matinee. As luck would have it a Hollywood producer, Lawrence Woolsey (John Goodman), known by the cinemagoers for his gimmicky science-fiction and horror films, is heading down through the Keys to promote his latest film, Mant! (“Half man! Half ant!” “in Atomo-Vision and Rumble-Rama!” We are told from the posters). Woolsey will be pulling out all the stops and gimmicks for his latest feature. The kids are invited for a preview of the film while the world prepares for nuclear war, for as Woolsey sees it (and indeed many writers on 1950s science-fiction that these films are about the power of the rapidly growing nuclear age) that he is feeding on the paranoia.

This film was clearly a labour of love for Dante. As the extras on the disc attest to, Dante is apparently a very relaxed film director who relies on the correct hiring of cast and crew to do the job he has hired them to do. The film is wholeheartedly a labour of love, even if it is a rather eccentric one. Well, it is Joe Dante! The basis for the story and the character of Lawrence Woolsey is a Hollywood producer and director William Castle. Throughout the 1950s there were a number of gimmicks and techniques that were designed to create a more immersive experience for the cinema going public: 3D and Cinemascope were perhaps a couple of the longer lasting and less gimmicky gimmicks to keep audiences coming to the cinema rather than watching TV from the comfort of their own home. Castle introduced new gimmicks to each film he brought out: The House on Haunted Hill (1958) starring Vincent Price had “Emergo” in which a skeleton with red lit eyes swooped down on audiences from the screen at a particular moment, The Tingler(1959, also with Price) had “Percepto” in which the audience would receive literal electric shocks in their seats; in 13 Ghosts (1960) “Illusion-O” was a red cellophane viewer in which the viewer could see the ghosts and Mr. Sardonicus (1962) had a poll at the end of the film as to the villain’s fate (but of course there was only ever one outcome). Other films also involved the audience to sign (false) insurance indemnities in the event of a heart attack. Looking at these gimmicks Woolsey’s gimmicks do not seem so crazy after all.

There is great attention to detail in the film from the bright and garish light of John Hora’s cinematography, a Dante regular, to the details of the bric-a-brac and costumes and cars in the film (as well as the requisite 60s soundtrack) and most particular the abundant shots of horror magazines and fanzines (from Dante’s own collection). The film itself is not uproariously hilarious but is humorous and will particularly appeal to anyone who is a fan of or is familiar with the 1950s monster movies. The first of these and followed by many copycat and variations was Them! (1954) about giant ants attacking Los Angeles and in itself is still a cult favourite. The film within a film, Mant! (which is shown as a full film on one of the disc extras) is like a blending of The Deadly Mantis (1957) and The Fly (1958) and again Dante’s attention to detail in ironically making the film replete with the fictitious “Atomo-Vision” (man running around the cinema in an ant suit) and “Rumble-Rama” (a loud sound effect) as well as smoke and sparks adds to the pot-pourri of this monster feature.

Joe Dante has brilliantly brought to life not just the look of the period but also the paranoia and the genuine fears that the nuclear age brought to everyone including the kids. The scene in which the alarms go off and the class is brought out to the corridor and made to lie down with the hands over their heads for the first blast wave is blackly comical but accurate demonstrating some of the lunacy of the age – but is also accurate. The extras, as usual with Arrow is about as complete as it could be. There are on-set footage aplenty as well as many interviews with Dante, Hora and veteran actor Dick Miller and future director and writer John Sayles. The best extra on the disc is the 30 minute discussion on the film by Dante in which the director talks of how his love of cinema played such a vital role in the nostalgic look and interest in the film. Nice cover art by Arrow Video regular Rick Melton.