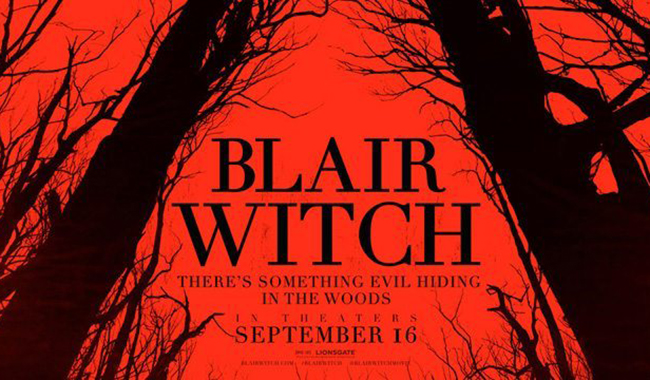 Nobody was expecting, or even wanting, another sequel to The Blair Witch Project when Adam Wingard’s film “The Woods” was announced.  But sudden interest was perked when it was revealed that “The Woods” was actually a BWP sequel in disguise when it screened at the San Diego earlier this year.  A disguise that was then dropped immediately and was then renamed Blair Witch.  What was astounding was the universal praise that the film then received.

Now it has screened for the rest of the critics and the world awaits.  We are not expecting it to be quite the phenomenon that the original was.  That expectation would be ludicrous, but Blair Witch should do some very decent business overall purely on the back that Horror films right now are somewhat in fashion again at the box office (And we mean good horror films with good word of mouth).

It’s also a strength that it has director Adam Wingard (The Guest, You’re Next, A Horrible Way to Die) at the helm as well as his regular screenwriter Simon Barrett. A team dedicated to bringing something new to audiences, something visceral and exciting. The way that they launched the film by surprise is to their credit. Had they announced that they were making the film first it may have seemed like a step down from their previous two hits The Guest and You’re Next. A lazy way to make a buck. But clearly the film is evidence that they have turned in something that is very close to the original but builds on the quality of it and adds to the mythology at the same time.

This time round we find another team of college documentarians heading out to the woods in search of the truth. One of their gang is fully intent of finding his sister, Heather, who went missing at the end of the first film.

We are then treated to a familiar set up for many a “Found Footage” film: The team assemble; they each comment on the likelihood of the realities of the adventure; check their gear and explain it to the audience; do a bit of test shooting, then make off on their journey to meet the locals before heading deep into the woods where things rightly do go bump in the night.

To say more about the film might spoil a trick or two, suffice to say that the film follows a very similar road map that the first film did – this one does it a bit better. The visuals are a huge leap forward, the sound work is excellent and the lighting at night is much more bearable that you might think.  Sure there are still moments of cameras shaking all over the place when people are running around from time to time, and there are some very odd abrupt (often loud) edits when the subjects cut their cameras or turn them back on again. This adds a bit to the mounting tension but sometimes become a bit wearisome. And there are a few too many “people suddenly leaping into frame or out of the bushes” moments that might test some people’s nerves. But to give the film its well earned credit, the “proper” scares are worth the journey.

The big question that may be on people’s minds is “Do they go there?” Meaning, do they show you more than what the last film did.  To answer that is a spoiler in itself. So we will simply say that they certainly add some very interesting elements to the film that build on what was put there in the first film, from the hanging twigs, placed rocks, the location traversed and even time spent there are all toyed with. If you want to know more then clearly you want to go see the film and we recommend that you do, and we recommend you do it in a packed theatre.