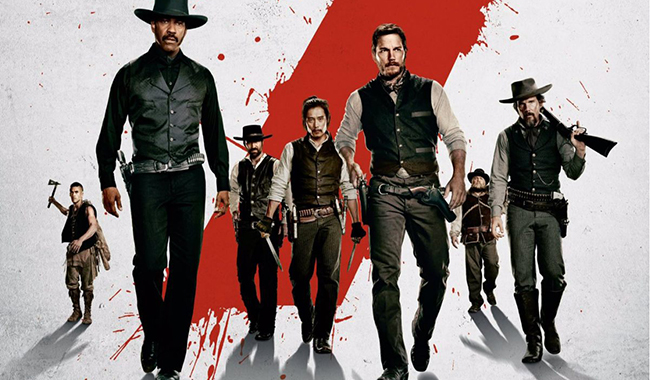 We have an onslaught of remakes at the moment hitting theatres. Blair Witch, Kickboxer: Vengeance and this big Hollywood polish of The Magnificent Seven featuring Denzel Washington, Chris Pratt and Ethan Hawke.

It’s a fairly straight forward affair.  A bad man (Peter Sarsgaard) and his band of heavies rough up a town and murder a few locals – which sends a grieving widow to seek the aid of Washington’s bounty hunter to beg for his services to help liberate the town. And so Washington (loosely in what you might perceive as the Yul Bryner role from the 60’s classic) sets out to recruit a band of merry men. Some with connections to the previous version of the film (Chris Pratt is sort of the Steve McQeeen, Ethan Hawke the Robert Vaughn and so on).

But this modern take seems to want to come off more as “The Politically Correct Seven.” That’s fine that they have made time for a young guy, a middle aged guy, an old guy, a black guy, a native Indian, a Mexican and an Asian; but it doesn’t really have any social impact for the time it is set in terms of any of it mattering. They may as well have cast a few of the group as ladies as well to complete what comes off as stunt casting for the sake of it not just being a bunch of white guys.

The pecking order is apparent from the casting as Washington (playing the role as you might very well expect) leads the way along with Pratt and, to an extent, Hawke, hog the screen time and dialogue away from the others.

Vincent D’Onofrio’s older religious member of the group stands out only due to the quirks that the actor has given the role (vocal inflections and praises to the lord). Without this the role is wafer thin much like many of the supporting group. Each has a weapon of choice and that’s about all we learn.

Chris Pratt continues his wise-ass routine that he has be developing from Guardian’s of the Galaxy and Jurassic World to a point where it is tired and expected. The hit and miss ratio of his gags do the actor no justice and make this role seem like a truly lazy choice and is simply cutting a cheque and fulfilling a quota demand for lazy filmgoers who just want a bit of a Chris Pratt fix.

But the film also suffers in its build up of the team with some forgettable introductions. You expect a decent script to introduce each member in a way that makes them memorable – here it is a by the numbers use of blades, guns and how they work in a confrontation. In one case it is genuinely perplexing: The Mexican outlaw (Manuel Garcia-Rulfo – who looks and acts well in his part) becomes a happy member of the team because he is threatened into it. A “Join or Die” scenario that makes no sense, as the moment he is threatened it is he that has the upper hand over Washington. He might simply plug this cocksure leader and be on his way. Instead he accepts the terms; this being if he joins, then Washington’s leader will never again hunt him for bounty (although it is made clear that he will still be an outlaw in the eyes of others).

The only actor to have any decent arc in the film and truly relish their screen time is Ethan Hawk’s haunted sharpshooter. He delivers a cocksure attitude in every regard of the job, except when it comes to killing men again. For sure it’s a predictable arc, but Hawke makes it compelling and entertaining all in the one go.

Antoine Fuqua’s direction is fairly routine. Sure the film looks good, but you will have likely seen so many more westerns that look infinitely better, perhaps suggesting that anyone can go out west with a camera and make it look good with the right scenery around them.

The lacklustre build up makes it a bit of a slog to get to the final fight, and at well over two hours this is indeed a slog getting there with so many lost opportunities given way to lazy humour.

The film’s “made by committee” feel is evident in the open scene where Peter Sarsgaard’s villain is given a “by the numbers” entrance. There is no tension in the scene as you know this is a clear and cut “bad man here to kill some people so the audience know how bad he is” scene.

Even some of the added dialogue off-screen from bystanders is on the nose in several scenes that you feel they filmmakers have no confidence in an audience being able to put together what is show to them. We apparently have to have people saying out loud what is happening as well.

The music of the film also suffers. The late James Horner is co-credited and anyone familiar with some of his big screen work will spot it immediately. There are cues ripped right out of the likes of Patriot Games, The Mark of Zorro and Troy, which is just pure laze.

It’s a shame that such a known commodity should get such a forgettable make-over with 90% of the work being that of the auto-pilot.