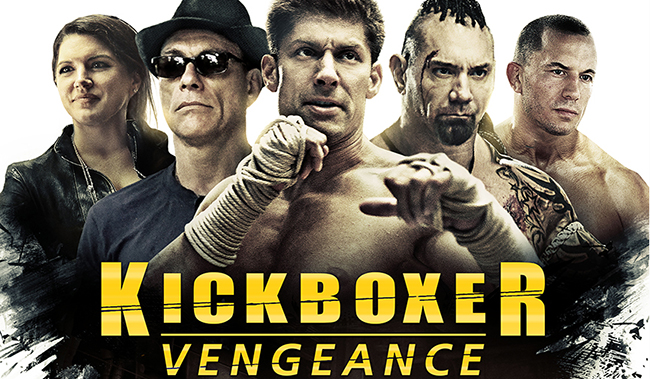 We are at the point now where we are remaking Van Damme movies – and Kickboxer is first under that limelight.  But the surprise is that the film is getting a short cinema release, and features some fairly prolific talent. The big get is of course Dave Bautista playing the villain Tong Po. There is also room it seems for Gina Carano (in a non-fighting role) – and the cherry on the cake is the Van Damme himself, this time entering the role of the Master who trains our new young hero.

Alain Moussi steps in to play Kurt Sloane, seeking revenge for the death of his brother at the hands of Po. Moussi certainly has the physique to get the job done, but lacks any of the charisma that van Damme brought to the role in the original film.  We understand some people may find the use of the word Charisma with Van Damme as a bit of a joke, but it is no joke. Van Damme may have needed to stretch a few acting muscles back then, but there was no denying his presence on film, and his accent certainly helped to mould his onscreen image.  Moussi is stuck with a fairly bland American accent, and bland is how he comes off in this first try.

It isn’t helped that motivations and surrounding characters add very little (or in some cases – add plain confusion) to what should be a fairly straight forward revenge flick.

The film starts in an interesting fashion already set after the death of his brother and we find Sloane joining Tong Po’s camp in order to get close to and then kill the Master.

The film then flashes back to how we got here. This sets the film apart from the original which took a linear approach. But the addition of police, corrupt police, and rather confusing underground fighting system add way too much complexity which raises more issues rather than any tension.

Sloane’s decision to then approach the same Master (Van Damme) who failed to prepare his brother for combat is also an odd character moment. Would you go seek the help of the same guy who trained your brother who was just murdered with ease in the ring?

Throw in a romantic/police interest (the romance part which comes out of nowhere) and you have some much bungled ingredients to what is an otherwise fairly enjoyable affair.

Of course you came for some fighting – and there is plenty of is. Moussi gets to show off some interesting moves throughout the film as he trains and fights. Van Damme also gets to have plenty of moments (Usually handing the lead his ass back to him as he trains him). And Bautista gets to project some real power on screen as the mammoth that is Tong Po.

Fans of the original will enjoy a few nods back to the film – but the best (and literally the best moment of the film) is saved for the end credits, which are interrupted with a hilarious extended outtake. It also demonstrates a bit of comic flair that Moussi otherwise never got to deliver during the film, despite all of his best intentions.

Kickboxer: Vengeance is a beautifully shot film, but is only a step above what you might otherwise expect from Direct to DVD releases. It has enough merit to warrant a viewing, but it isn’t getting near the Kickboxer throne as champion.