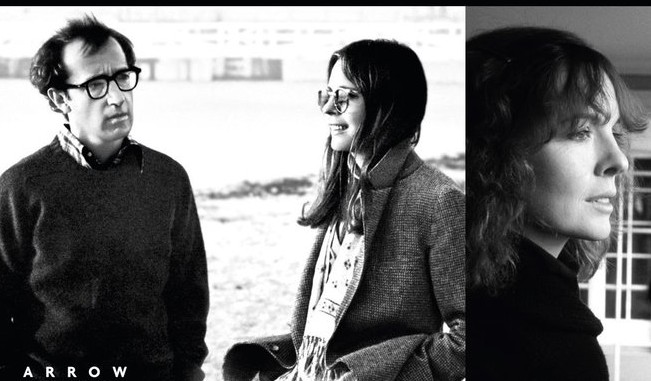 The word genius is perhaps a moniker that is too readily given to individuals with talent. But in Woody Allen’s case it perhaps can’t be helped but be said not only in a literal sense, but maybe also in a tongue-in-cheek one, in a manner that may not have been lost on the likes of Oscar Wilde. As Allen says to Diane Keaton’s character in Manhattan (1979): “he’s a genius, she’s a genius, wow, you know a lot of geniuses, you should meet some stupid people sometime, you might learn something”. The building of his career can be seen in Arrow Video’s latest box-set: ‘Woody Allen: Six Films 1971-78’. This collection does not represent all of his films made in this period, but is certainly the 6 key films that he directed in the years covered by this collection. There are a couple of notable omissions: his first film as director and screenwriter, as well as actor on the third film he performed in, Take the Money and Run (1969), which is no better or worse than the one the earliest film in the set, Bananas (1971); though unlike the films included it wasn’t released through United Artists. Also omitted is one of his best and most mature early films, Play It Again Sam (1972) in which Allen plays a nervy divorcee film obsessed sportswriter looking for love. Play It Again Sam was not directed by Allen, but by Herbert Ross bringing at that time a more accomplished directorial flourish to Allen’s screenplay (from his own play) to the screen.

Never the less all the films that are included represent a move from the gag writer into a more accomplished filmmaker, culminating with his first Oscar winning film, Annie Hall (1977) – one of the only comedies ever to win an award in the Best Picture category. The last film on the disc is a complete contrast. Interiors (1978) is the only serious non-comedic film included and the first serious film in his career in a rather intense familial drama. There is a theme that runs through all of Allen’s films from the ‘earlier funny films’ to coin a phrase through to his latest releasesm there is a self-deprecating humour, using intellectualism to challenge intellectual snobbery, human tragedy from small situations to near death ones to great observational comedy. The earliest film of the 6 is Bananas, a comedy about a products tester who lives alone and starts dating a politically active student (played by Louise Lasser, at the time Allen’s recently divorced wife) who she blithely dumps. In the hope of wooing her back he goes to a Central American country and reluctant becomes the country’s dictator. Naturally, there are some very funny moments such as the scene in the news shop where he is trying to buy a porn magazine discreetly to the scene with the muggers on the Subway – one of which is played by Sylvester Stallone in his first role. Bananas was highly praised on its release and this, like Sleeper (1973) there is a clear influence of Buster Keaton and silent comedy going on; silent comedy written and performed by a former stand-up comic none the less.

His next film was a hit and miss comedy, Everything You Always Wanted to Know About Sex *But Were Afraid to Ask (1972). Based off a sexual study book by psychologist David Reuben, Allen’s portmanteau comedy of 7 stories work in some places and less successfully in others. The film looks very dated now with the standouts being Gene Wilder in the episode when a doctor falls in love with an Armenian shepard’s sheep, the inner workings of the body and the brain through sexual intercourse with Allen dressed up as a sperm and the Dr. Frankenstein story with John Carradine playing a mad doctor thrown out of Masters and Johnson for forcing a man to make love to a large rye bread and creates a giant breast lactating through the countryside (only to be caught in a giant bra – “one thing worries me” says the policeman – “they always travel in pairs”). The following year Allen made his most accomplished film to date, Sleeper. The humour of this dystopian science-fiction film in which the citizens are pacified by the Orgasmatron that substitute’s sex and the Orb that gets users stoned, while the country is run by a reclusive ruler (but really all that is left of him is a nose following a terror attack). Woody plays Miles Monroe who wakes from a 1973 “dental operation in the 22nd Century and I’m Flash Gordon”. The sets and look of the film are wonderfully sterile while the comedy remains more visual comedy.

The next film, Love and Death (1975) shows a new maturity. Shot in then communist Hungary and set during the Napoleonic wars, it is more a gag led comedy and deals with love and death as it says on the tin with much in the way of intellectual comedy and even mocks intellectualism, all played to the strains of Prokofiev’s music. But it was Annie Hall that led to Woody Allen becoming the household name we know today. It is still a film that has dated very little and is as hilarious today as it was on its release. It is also Allen’s first ‘very New York’ film in which his characters, like many of those that followed definitively identified him with the Big Apple. It is a smart and intelligent film about the psychology of relationships. Allen had several years before been involved in a relationship with Keaton and over the years she co-starred with her in many of his films; indeed she is the actor most closely identified with his films, including that of future wife Mia Farrow. It took Keaton years to shake off being typecast as Annie Hall and I am not convinced us that she ever has.

The last film in the Arrow Video collection is Interiors (1978), also starring Keaton, but a completely different change of direction in that it follows the impact of a break-up between an elderly couple on their three daughters and son-in-laws. Whereas previously Allen had always referenced Ingmar Bergman and everyone knew that he was his favourite director, in Interiors he attempts to emulate Bergman in script and in the stark look of the film. It’s not a great film, but you can see the direction he would like to head. Themes of familial relationships and tragedies were played out better in another Allen Oscar winner, Hannah and Her Sisters (1986), but the seeds of that film are evident here. Of course Woody Allen would make more serious films, and not just stick with comedies but his more successful films would bring in both elements.

The quality of the picture on all the films is superb and other than trailers there are no extras. However, Arrow Video are already lining up a follow-up collection covering the next stage of his period between 1979 – 1985.