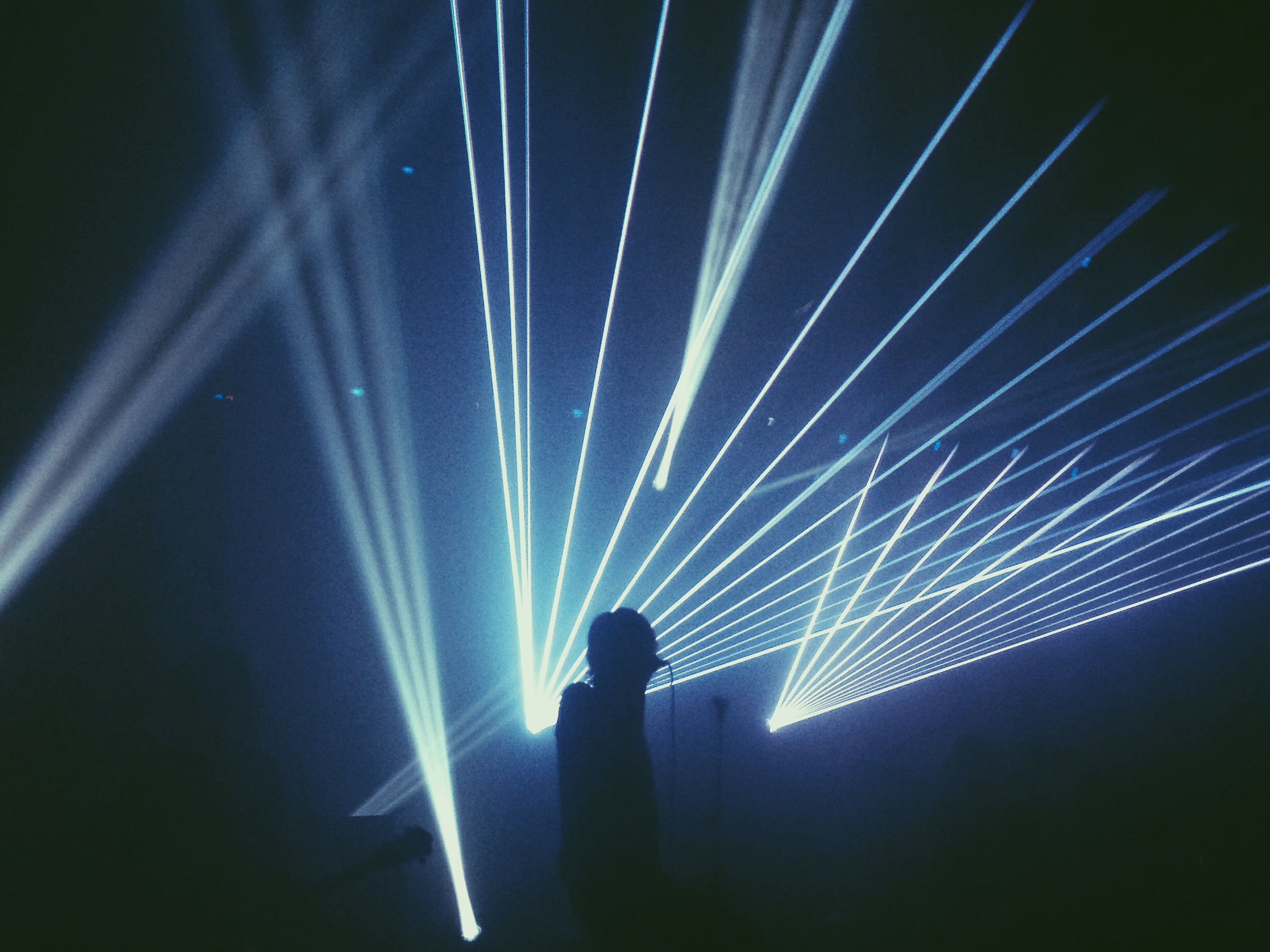 In an age where drugs are winning the war on drugs, it’s worth reminding people of the beauty and creativity that altered states can inspire. Enter: the Liverpool International Festival of Psychedelia. Over the course of two days, and set in an industrial outpost of Liverpool known as the Baltic Triangle, a few warehouses are transformed into a visual, aural and spiritual homage to all things tripping.

Proceedings begin with Japanese krautrock band Minami Deutsch. It’s hypnotic stuff that dips between being pensive and delicate to being an all-out ear assault. With groovy motorik beats constant throughout, the best bits are when the band sends listeners to space with thrashing fuzzy guitar solos. The bloke in front of me says to his mate, “This makes me feel like I’m on ket.” It’s not hard to see why. The music manages to disassociate the mind from the body to create a truly otherworldly feeling.

Up next are Seattle-based, surf noir quartet, La Luz. Clearly, some transport issues have gotten in their way as they arrive late on stage, explain in a fluster they’ve driven for nine hours, and rush through their set. But it’s short and sweet, in the best possible way. The riffs are buoyant and the melodies are hazy. It’s probably the most easy listening stuff of the weekend, with the girls’ haunting refrains of “ooooh-wa-ah-ah” stuck in one’s head for days.

There’s no doubting the popularity of Tokyo psych outfit Kikagaku Mayo. As Sammy Powell of The Beauty Witch points out, here are a band whose fan base not only grows with every gig he puts on, but get younger and younger each time. With their long hair, chill demeanour and sitar, the band are a fascinating watch. Every track is a gem of layered textures and cinematic beauty, managing to breathe fresh life into the large concrete venue.

The PRZYM stage is a new addition to the festival. Though small in size, it’s effective in purpose. Tiered benches, bean bags and two large projected screens make it a cosy setting to experience some fascinating performances over the two days. Brighton two-piece Big Naturals are one such act. With rigorous drumming, thrashing riffs and an ever-changing graphic backdrop, bassist Gareth Turner and drummer Jesse Webb sweat it out to bring a gloriously punchy set.

The night ends with London-based cellist, Oliver Coates. It’s a one man, one laptop and one cello setup that brings us perfect late-night electronica. His set easily shifts between dance-friendly, glitchy beats to stark mournful minimalism, all done with the thoughtfulness and precision that you’d expect from a classically trained cellist.

Day two of the festival is like any other. The same faces appear, albeit looking a little bit worse for wear. But there’s nothing hair of the dog can’t fix, and the queues for the drink tokens are healthy as ever. And despite the looming grey clouds, the atmosphere is lively.

Inside the Furnace stage, things are getting a little balmy. Australian band Methyl Ethel use shimmering melodies to create a sweet, dreamy vibe. “We must be quick. We must be swift, we must play a few songs,” lead singer Jake Webb awkwardly proclaims mid-set. They might not be the most charismatic band on the planet, but their gawkiness is forgotten as soon as they play. It’s indie dream-pop that is both relaxing and uplifting.

Things get darker (both literally and figuratively) as Eagulls take to the Camp stage. The band starts off strong, diving right into creating a pulsating, agitated noise. George Mitchell’s vocals cast an ominous sentiment across the room, with a black and white backdrop of a vintage film clips adding the feeling of doomed noir.

If psych music is all about the trip, then this is when you realise your mind is a hell-bent distorted. Moonlandingz are the epitome of hedonistic fun. There’s a Rocky Horror Show vibe as Johnny Rocket (aka Lias Saoudi from Fat White Family) sleazes around on stage wearing a silver crotch piece and red body paint, accompanied by Rebecca Taylor (from Slow Club) as his glamorous sidekick. The audience love it, and Johnny is enthusiastic in lapping it all up. It’s ridiculously good entertainment, and makes for the ideal live performance.

With each stage having a limited capacity, it’s no surprise there’s a bit of a queue to get into The Horrors. What is surprising though is seeing two of the band members waiting in said queue. After a bit of collective chuckle, the queue direct the boys to the smaller side door. Once inside, the wait is worth it.

With the help of a mesmerising laser light show, and shielded by the fog of a smoke machine, the band are an otherworldly presence. Faris Badwan delivers his vocals with brutal indifference, adding to their aura of slick detached cool. While Moonlandingz were indulgent fun, this is when the trip gets introspective. The layers are intense, with synth beats, fat bass and wailing guitar all coming together to create a menacing sound for every track. Older material is reworked to seamlessly fit with more ‘psych’ releases of recent years. And while it’s easy to diss the band for their total lack of audience interaction, their dedication to the gothic aesthetic is admirable.

There’s a real international feel to the festival, having met people who had travelled from different continents, counties and corners of the Merseyside to attend. It’s also worth noting the strong Japanese flavour to the weekend’s proceedings, with the likes of Minami Deutsch, Kikagaku Moyo and Acid Mothers Temple creating quite the stir. Plus, more than once were conversations about moving to Japan overheard.

It’s a festival with good vibes only. Accidentally spilt drinks are greeted with sympathetic smiles, and empty benches are filled with chatty strangers. In a time when so many alternative festivals are heading towards homogeny, Liverpool Psych Fest manages to retain its edge. From the mod girls in go-go boots to the dandy boys in velvet blazers, and the groups of old blokes just having a great time, the generationally diverse crowd really adds to the friendly and creative feel of the festival.

Liverpool holds onto an aura of open-mindedness and escapism. With its back against England and its eyes towards the Atlantic, the city is the perfect place for all international and galactic psych-heads to congregate and lap in the beauty that psychedelia has to offer.