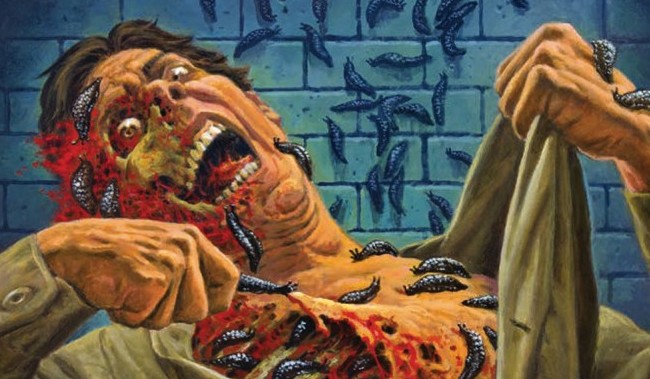 What a nasty little film Slugs is! Well after all it was made by Juan Piquer Simón, the director behind another nasty and visceral cult horror from the 1980s, Pieces (1983) (also released by Arrow Video). Slugs has a few precedents. There had been many other normal sized killer creature films from the previous decade including bees in The Swarm, The Bees (both 1978) and The Savage Bees (TV 1976), ants in Empire of the Ants and TV movie, Ants (both 1977), spiders in Kingdom of the Spiders and another TV movie, Tarantula: The Deadly Cargo (both 1977). Frogs (1972), cockroaches in Bugs (1975) Alligator (1980) and the film closest in relation to Slugs, flesh eating worms in Squirm (1976). I do recall as a boy that the book ‘Slugs’ was a best seller and readily available at WH Smiths. Written by Shaun Hutson in 1982 it was meaty material for any horror director wanting to give it a go.

There is really not a great deal of story to Slugs. It is predominantly a Spanish film with many of the interiors shot in Spain and the rest of the filming shot in Lyons, in upstate New York. The crew were mostly Spanish as were most of the cast. As with many international films like this, criticism over poor acting, dialogue or dubbing are often, usually rightly levelled at these films. The film opens with a young couple fishing. As with many horror clichés, the lusty teen male falls into the water when the water turns red with blood. In the meantime in town people start dying, including a bum who loves in his filthy run down home. He throws an old pizza box down into the dark cellar where we can just make out a black slithering mass in the cellar. The film then moves to the protagonists, one of whom has finger bitten by a slug while he helps his wife weed the garden. Naturally, his best friend is an expert in slugs and takes the snappy little fella to him to analyse and between them they realise that these are psychotic little critters.

The acting throughout is ropey, but according to Carlo de Marchis, the spfx co-ordinator on one of the extras on the film, Simón was a talented director who, despite budget considerations was equal to Steven Spielberg. That’s quite a statement. The gore is visceral and of course you get the feeling that the performances are not important and most likely done in one take whereas the pyrotechnics, the spfx and horror make-up are primary. More attention was probably given to directing the slugs which were undoubtedly tricky little devils to direct. And a lot of them there are too. The extras, as usual with Arrow are plentiful and the picture looks fresh and clean unlike how it would have looked on its VHS release. The extras include an interview with spfx man de Marchis, actor Emilio Linder, who literally gets eaten apart in a restaurant. Most interesting of all though is the interview with production manager, Larry Ann Evans who worked on the film and clearly had a bond with Simón. A funny piece of nastiness that is laugh out loud in places as well as equally wonderfully gross. Some great cover artwork too (including the reversible sleeve).